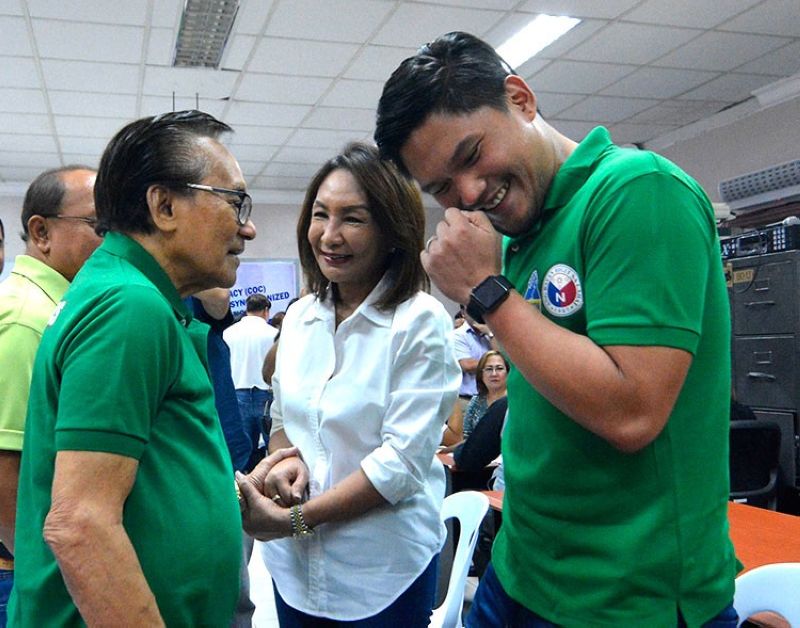 CEBU. What did Cebu governor-elect Gwendolyn Garcia (middle) say to Cebu first district congressman-elect Eduardo Gullas (left), or other way around, to elicit laughter from his grandson, Talisay City mayor-elect Samsam Gullas? The Gullases, who ran under the Nacionalista Party in the May 13, 2019 elections, swapped positions. (SunStar/Amper Campana)

WHEN she assumes the governorship at noon of June 30, Rep. Gwendolyn Garcia will not only need the support of the majority of the Provincial Board (PB), but also the alliance of incoming mayors and vice mayors to push her programs.

Based on the final official tally of the Commission on Elections, incoming mayors and vice mayors from at least 27 out of 51 mayors in Cebu Province are allies of the governor-elect.

The Nationalist People’s Coalition (NPC), on the other hand, endorsed incumbent Vice Gov. Agnes Magpale as its gubernatorial candidate.

What does this mean for Garcia’s governorship?

“A stronger mandate and a more united province, poised to again make Cebu number one,” Garcia told SunStar Cebu in a text message on Sunday, May 19.

In the first district, except for reelected Minglanilla town vice mayor Loben Geonzon of the NPC, all winning candidates are from NP.

In Sibonga, the tandem of Lionel Bacaltos for mayor and Mariano Laude for vice mayor made it.

NPC candidates in the second district won over Garcia’s allies.

In the third district, which the Garcias have been representing in the House for two decades, majority of the incoming top town and city officials are allied with PDP-Laban and One Cebu.

PB Member Alex Binghay who was elected town mayor, while his son and running mate, Alfie, won as vice mayor.

The only NPC bets to make it in the third district were Barili vice mayor-elect Julieto Flores, and brothers Danilo (incumbent vice mayor) and Democrito Diamante (incumbent mayor) who won their mayoralty and vice mayoralty races in Tuburan town.

In the fourth, Garcia’s allies with NUP from seven out of nine LGUs won in the midterm polls.

Meanwhile, NPC bets that made it in the fourth district include Bogo City Mayor Carlo and his sister, Vice Mayor Mayel who won their reelection bid, and reelectionist San Remigio Mayor Mariano Martinez.

In the fifth district, the Durano-led Barug Alang sa Kauswagan ug Demokrasya party remained strong, with its candidates winning in nine out of 11 LGUs.

The only PDP-Laban and One Cebu candidates that won in the electoral race were reelectionist Liloan Mayor Christina Frasco and her running mate, incumbent Vice Mayor Thelma Jordan. Frasco is the daughter of governor-elect Garcia.

In Poro, the uncle-and-nephew tandem of incumbent mayor Luciano Rama Jr. and Edgar, emerged victorious after they won the vice mayoralty and mayoral races.

The Arquillano brothers of Bakud party also won the top posts in the northern town of San Francisco based on final and official results.

But PDP-Laban allies were able to sweep the mayoral and vice mayoralty races in the sixth district.

But in the seventh district, NPC bets gave a strong fight as shown in the results of the May 13 elections.

Badian Mayor Carmencita Lumain, who was originally with NPC before she jumped ship and joined One Cebu last March, won her reelection bid after running unopposed. (RTF)