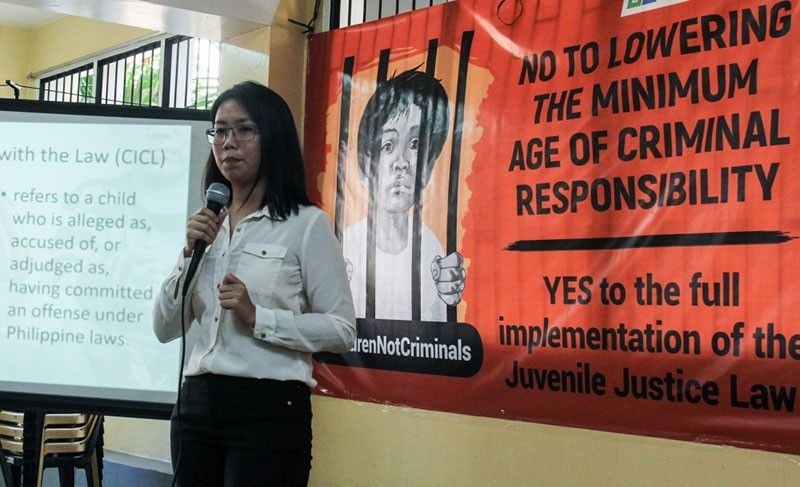 CHILDREN ARE NOT CRIMINALS. Lawyer Stephanie Tan of Children’s Legal Bureau speaks during a forum against the lowering of the minimum age of criminal responsibility at Sentro sa Katilingban in St. Theresa’s College in Cebu City. (SunStar Photo/Amper Campaña)

CHILDREN’S rights advocates have urged the government to build more Bahay Pag-asa (House of Hope) for children in conflict with the law (CICL) and implement in full the provisions of the Juvenile Justice and Welfare Act of 2006.

Various groups, including the Children’s Legal Bureau (CLB), also opposed the bill lowering the age of criminal responsibility to 12 from the current 15 years old.

CLB legal officer Stephanie Tan said there is no presence of Bahay Pag-asa, which provides short-term residential care to CICL, in Cebu and other parts of Central Visayas.

She said there are only 58 Bahay Pag-asa in the country.

The Juvenile Justice Law (JJL) mandates the Department of Social Welfare and Development to run the Bahay Pag-asa, which caters to CICL who are above 12 to 15 years of age, who committed a serious crime, with a commitment order issued by the court; and are repeat offenders, and subjected to a community-based intervention in the past.

Tan said most of the CICL resorted to petty crimes such as stealing of food because of hunger.

“They do petty crimes for survival,” she said.

During a forum on Monday, May 20, Tan said the full and proper implementation of the JJL can help solve the problem of juvenile delinquency in the country.

She further said the CICL should not be labeled as criminals.

According to CLB chairperson Archill Capistrano, the passage of the JJL is worthless if society continues to blame the CICL as the main problem.

The lawyer said legislators tend to overlook the reasons behind the CICL’s actions.

“We’re focusing on the child. We forgot the society and the parents who are responsible for the child,” Capistrano said.

In 2017, CLB launched a signature campaign against lowering the minimum age of criminal responsibility.

Capistrano said CLB will conduct theater plays for children and dialogues with the parents to raise awareness about the JJL.

CLB members are willing to collaborate with the newly elected government officials to support their advocacy. (JJL)