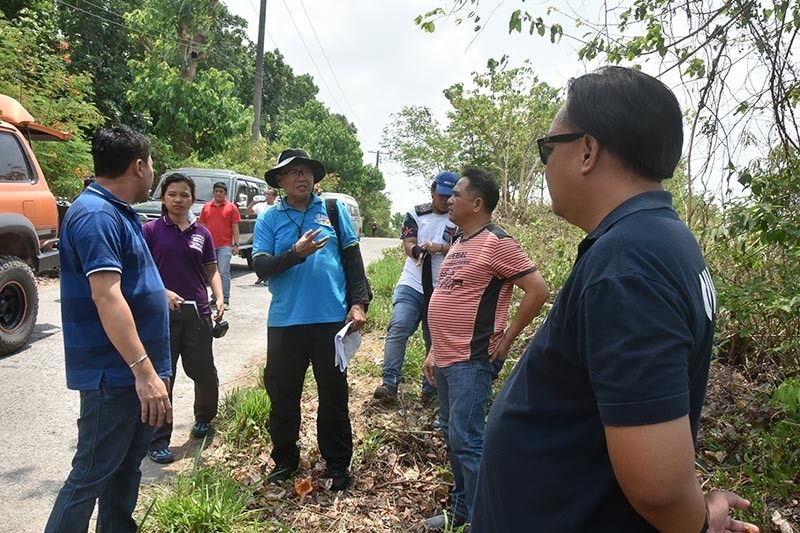 PAMPANGA. Department of Environment and Natural Resources-Mines and Geosciences Bureau Chief Geologist Noel Lacadin spearheads a ground assessment of the Aeta community settlements in Floridablanca. Also in the photo are Office of Civil Defense Officer Michael Dumlao and some volunteers from the local government unit of Floridablanca. (Jun Jaso)

CITY OF SAN FERNANDO -- Governor Lilia Pineda recently urged the Department of Environment and Natural Resources (DENR)-Mines and Geosciences Bureau (MGB) and other partner-agencies to inspect and assess quake-hit areas in Pampanga.

"We should know the state of our lands in the province so that we would know what immediate actions can be done," Pineda said.

Based on the findings of DENR-MGB, the quake last April 22 left two landslide high-risk areas under their radar.

The MGB said at least two barangays -- Sitio Tagak, Barangay Nabuclod in Floridablanca and Barangay Dias in Porac town -- were placed under the "no habitation zone," as they were considered "high risk" to landslides.

According to Lacadin, landslide and geohazard threat advisories were already given to respective barangay officials and Local Disaster and Risk Reduction and Management officers of the concerned areas for immediate action and compliance.

"We are not depriving the Aetas from their right to stay in their ancestral lands. We have reminded them that these areas are identified as no habitation zones, but they can still be used for cultivation," Lacadin said.

Vice Governor Dennis Pineda, meanwhile, said he already tapped the help of the national housing agency, other partner agencies, private sectors, and stakeholders for the construction of an evacuation site for the Aetas.

Lacadin also asked officials to maximize the use of the geohazard maps for disaster management and mitigation.