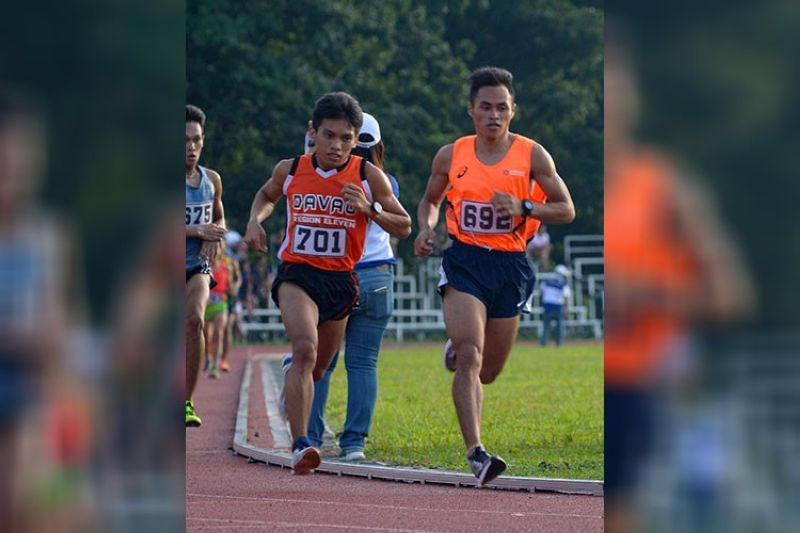 DAVAO Region struck for eight gold medals as of 12 noon Tuesday, May 21 -- four in athletics and four in swimming -- on Day 2 of the National Prisaa Games 2019.

Arlan Arbois Jr., 22, an incoming fourth year Criminology student of the Rizal Memorial Colleges (RMC), and Fritz Clarence Lantaco, 21, a Bachelor of Physical Education sophomore of the University of Mindanao (UM), clinched the gold and silver medals, respectively, in the college men's 5,000-meter run at the UM track oval in Matina, Davao City Tuesday, May 21.

Lantaco, for his part, said he knew he could no longer keep up with Arbois but he focused on keeping the second spot until the finish line.

"Nakulbaan ko pero salig lang sa sarili (I was nervous but I just believed in myself)," said Pongaron, a first-timer in the Games.

Mantilla, 17, of Ruparan, Digos, registered a distance of 36.94 meters to rule the secondary boys discus throw event at the expense of Western Visayas' Junel Endela (35.09m) and Gerzon Serrano of Cagayan Valley (31.93m).

He said, "Ambi nako second lang ko, wala ko magdahum kay karon rapud ko mag national Prisaa (I thought I was only second, I didn't expect to win since this is my first time to join the National Prisaa)."

Sumiblay, for his part, annexed the college men's discus throw with a record of 35.38m, while Renzy Gomolaga of Western Visayas (34.41) was second and Jaypee Carquez (33.89) of Bicol third.

Kyle Pajarito and Eirron Seth Vibar delivered two golds each for Davao region in the swimming competition held at the Davao del Norte Sports and Tourism Complex in Tagum City.

"Wala ko nag-expect kay one week lang akong training (I did not expect to win golds since I only trained for one week)," said Pajarito, who dedicated his triumph to his family, God and to Davao region.

Vibar, who copped two silvers and a bronze in the Palarong Pambansa 2019, said he hopes to win more medals.

"Target ko sana mag MVP," he said, adding that he will still compete in seven more events in the National Prisaa Games 2019 supported by the Philippine Sports Commission, City Government of Davao, Department of Education and Commission on Higher Education.