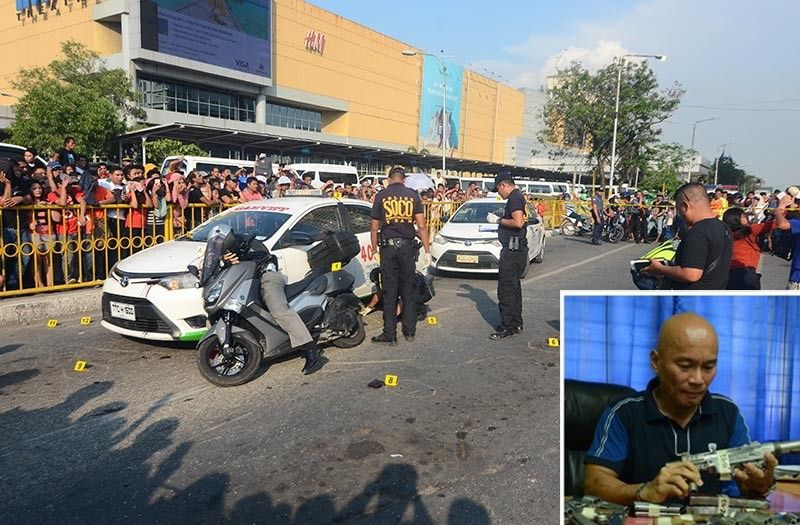 DAYLIGHT ATTACK ON BUSY INTERSECTION. P/Capt. Delfin Bontuyan, 55, slumps on the hood of a taxi after four men riding in tandem on two motorcycles opened fire at him at the busy intersection of Pope John Paul II Ave. and A. Soriano St., Cebu City as the signal light turned green. The men had been following the policeman from the Qimonda court building where he attended a hearing. He had P30,000 with him. (SunStar photo / Alan Tangcawan [Above]; SunStar Archives [Inset]) 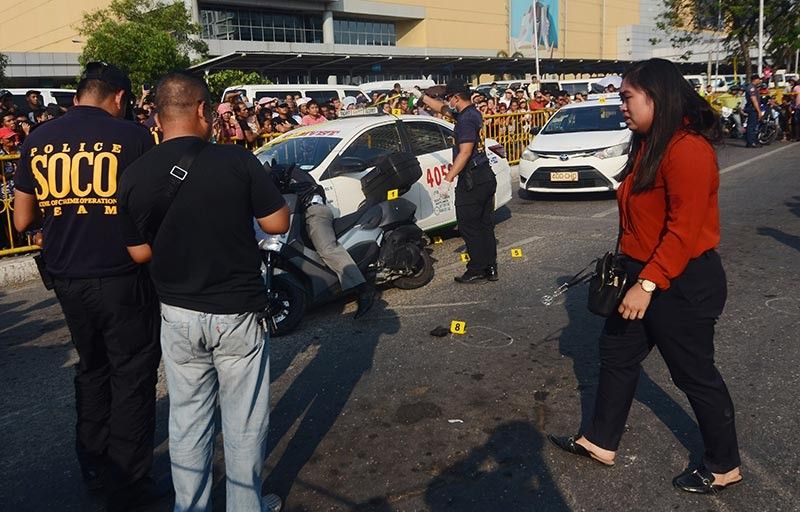 A FORMER member of the Criminal Investigation and Detection Group (CIDG) 7 was gunned down at a busy intersection in Cebu City in broad daylight on Tuesday, May 21.

P/Capt. Delfin Bontuyan, 55, had just attended a court hearing on a drugs case at the Cebu City Hall of Justice and was headed home. He was driving a Yamaha Nmax motorcycle.

He was unaware of the men riding in tandem on two motorcycles who had been following him from the Cebu City Hall of Justice at the Qimonda Building on Don Sergio Osmeña St. at the North Reclamation Area.

He stopped at the intersection of Pope John Paul II Ave. and A. Soriano St., and just as the traffic lights turned green, two men riding in tandem moved behind him and shot him.

Two more men riding in tandem drove to the front of Bontuyan and shot him some more.

Bontuyan slumped on the hood of a taxi that was also waiting for the go-signal.

His killers, who were wearing full face helmets, sped off towards the Mabolo church.

The Mabolo police station is only a stone’s throw from the scene of the crime, but his men missed the killers despite their immediate response, Mabolo deputy police chief Miles Damoslog said.

At the end of May 21, there was no word on whether Bontuyan’s killers had been caught.

When Bontuyan was removed from the taxi and his helmet removed, he bore bullet wounds on his back and forehead.

Damoslog said 11 bullet casings were found at the crime scene.

The taxi driver narrated that he heard gunshots. Then he saw the man on the motorcycle to his left falling on the hood of his taxi.

He adjusted his seat all the way back and did not move. He said he did not see the faces of the killers because of their helmets.

In 2016, shortly after the assumption of President Rodrigo Duterte, Bontuyan was one of the policemen transferred to Luzon, then to the Autonomous Region in Muslim Mindanao (ARMM).

Bontuyan was active in anti-drug operations. He had just come from a hearing of an illegal drug case on Tuesday when he was killed.

Bontuyan’s daughter, Christine Claire, rushed to the crime scene and bawled upon seeing her father’s condition.

Christine Claire is the chairman of the Sangguniang Kabataan of Barangay Talamban, Cebu City.

In a Facebook post, Cebu City Mayor Tomas Osmeña said that a day before Bontuyan was killed, police had approached him and asked how he was related to Christine Claire.

“The father of the girl who made this post about being harassed by both Barandog’s men and Garma herself was murdered today. His name is Captain Delfin Bontuyan, formerly PNP CIDG. Yesterday, he was approached by police who asked him what his relationship is to Christine Bontuyan, who was harassed by police during election day. Today, 20m (meters) away from Mabolo police station, he was shot and killed,” Osmeña said in a Facebook post.

During the election last May 13, Christine Claire posted on Facebook about suspicious men picketing in front of the voter’s assistance center of BOPK in Barangay Lahug, which happened hours after CCPO Director Garma held for inquiry some of their supporters. (AYB with RVC, MPS)