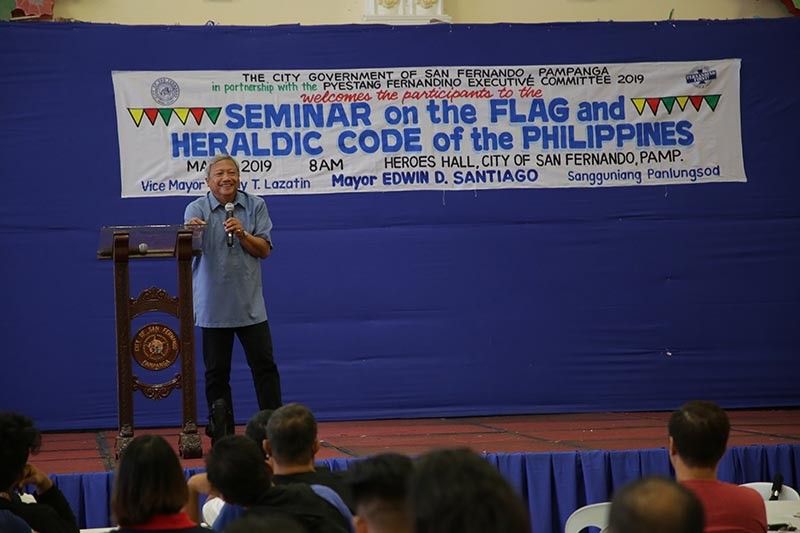 PAMPANGA. Teodoro Atienza, NHCP chief of Heraldry Section, leads the Seminar on Flag and Heraldic Code of the Philippines among the private and public sector at the Heroes Hall on May 21, 2019. The event was made in time for the celebration of the National Heritage Month and the forthcoming National Flag Day. (Contributed photo)

THE City Government of San Fernando and the National Historical Commission of the Philippines (NHCP) have called on the community to give respect and value to the Philippine flag.

The call was made both for the public and private sectors during the Seminar on Flag and Heraldic Code of the Philippines at the Heroes Hall on Tuesday, May 21.

The event was in time for the celebration of the National Heritage Month and the forthcoming National Flag Day.

The activity, organized by the City Tourism Office, aimed to enlighten government employees, teachers and students, barangay officials, and mall and establishments personnel about the proper display and tribute to the flag.

During the discussion, resource speaker Teodoro "Teddy" Atienza, NHCP chief of Heraldry Section, imparted some major contents of the country's Republic Act 8491 or the "Flag and Heraldic Code of the Philippines."

(Our national flag symbolizes our being Filipinos. It was formed out of patriotism, so we must continue to respect it.)

He also led the actual demonstration of the proper folding of the flag and draping on caskets.

For his part, Mayor Edwin Santiago said this call to community will reignite the patriotism of Fernandinos.

(One way to show our patriotism is to respect our national flag. We are happy that NHCP is helping us conduct the seminar, because through this, we can further boost our love for the country.)

Aside from the seminar, the City Government will also hold activities for the National Flag Day on May 28 at Heroes Hall.