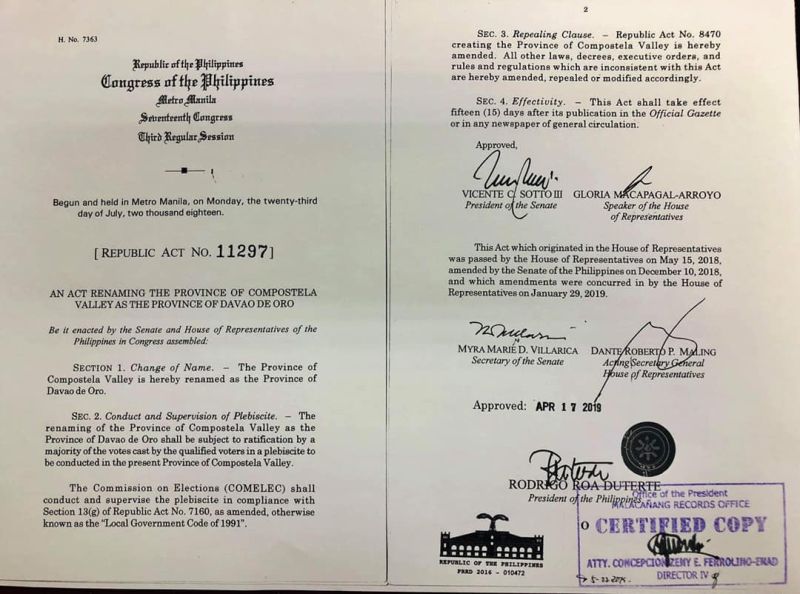 DAVAO. A copy of the Republic Act 11297, which was signed into law, renaming the province of Compostela Valley into Davao de Oro. (Photo from Rep. Maricar Zamora's Facebook page)

COMPOSTELA Valley is now closer to being renamed as Davao de Oro after President Rodrigo Duterte signed Republic Act (RA) 11297, which will rename the province.

Representative Maria Carmen "Maricar" Zamora, one of the sponsors of the Davao de Oro bill, shared on her Facebook account the good news.

In an official statement, Zamora thanked those who lobbied for its passage, and to President Duterte for signing the law.

"This new law, which comes at a most appropriate time, when we have just gone through the crucible of choosing our new set of political leaders," Zamora said.

She said they had worked hard for the renaming of the province.

"The enactment of Republic Act 11297 renaming the Province of Compostela Valley into Davao de Oro is but a realization of the longing of our people to reclaim our incontrovertible sense of belonging to our home region, and be called 'Dabaweños' once again," Zamora said.

Compostela Valley is the only province in Davao Region without "Davao" in its name.

Zamora told Sunstar Davao that she was worried that the law will not be prioritized, considering both Senate and the House of Representatives were busy due to the midterm elections.

"We did a lot of lobbying from the time that it was approved. Naningkamot mi na matutukan siya. If wala siya nakaapas, back to square one unta siya na bill. We really worked hard to monitor its passage. If only the law was not passed before both houses adjourned, it would have been back to square one," Zamora said.

Right now, she said they are now preparing for the formal transition, in preparation for the upcoming plebiscite.

Zamora said the Commission of Elections (Comelec) has yet to set a final date for the plebiscite.

Despite having positive feedback from Comvaleños, she admitted that some were not aware of it.

Zamora said Governor Jayvee Tyron Uy is now forming a transition committee to plan and campaign for the "yes" votes in the plebiscite.

Uy, in a separate statement, said the renaming of the province will further contribute to the development of the region.

"We feel so much happiness and delight on this development. This is another victory, equally sweeter with our recent election victory. We share this victory with the people of this province whose aspiration to be associated with the greater Davao Region has truly been unrelenting," he said.