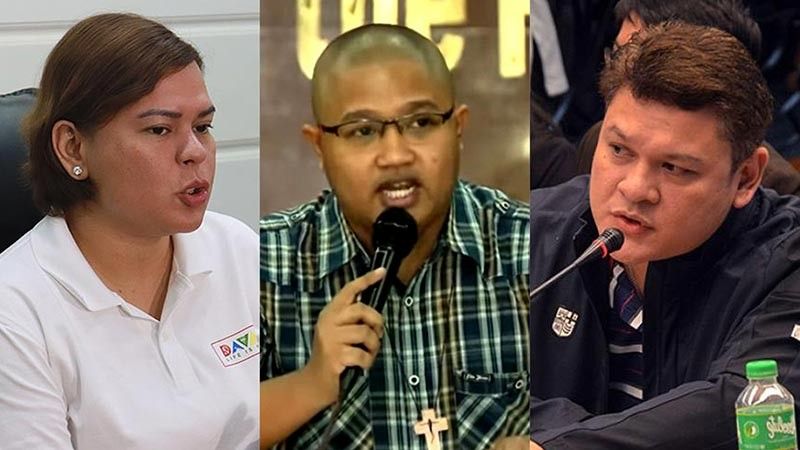 PRESIDENTIAL siblings Davao City Mayor Sara Duterte-Carpio and Representative-elect Paolo Duterte were not surprised after Peter Joemel "Bikoy" Advincula admitted Thursday, May 23, that his exposes on the first family's involvement in the illegal drug trade were all lies.

Advincula said in a press conference that the "Ang Totoong Narcolists" videos were scripted and orchestrated by the Liberal Party and Senator Antonio Trillanes IV.

Advincula also apologized to Paolo, his brother-in-law Manases Carpio and senator-elect Christopher "Bong" Go for the accusations made by "Bikoy," the hooded man in the videos.

He said the videos were released in order to discredit and damage the credibility of the administration's candidates in the recently concluded midterm elections.

Duterte-Carpio previously said she is not interested in suing Bikoy, as he was only being used by people who meant to discredit th administration of his father, President Rodrigo Duterte.

"This group is so disorganized they cannot even get to first base because the path to their objective is in disarray," the mayor's recent statement read.

"Kung ako leader ng grupo na ito (If I were the leader of this group), I will shoot myself in the head, get rid of the brain that is not useful," she added.

Paolo, for his part, reiterated Trillanes as the mastermind behind the expose.

In his statement, he mentioned that a proper investigation is needed since other names, including Senator Risa Hontiveros and several lawyers, were also dragged by "Bikoy."

"From the very start, it was clear that the Bikoy videos were fabricated with a narrative taken straight from the playbook of people whose desire is to destroy our name and our reputation," Paolo said in a statement.

"All the lies presented were also meant to crush the trust of the Filipino people in the authorities and inspire public disgust against the government -- truly the handiwork of people who want to undermine the Duterte administration," he added.

He said the same propaganda was used during President Duterte's candidacy in 2016.

"Ginawa nila ulit ito ngayong katatapos lang na halalan. Lahat nag- backfire. Naging Pangulo si Mayor Duterte noong 2016 at inilampaso ng taumbayan ang Otso Diretso ngayong 2019 (They did it again, this time during the recently concluded elections. It all backfired. Mayor Duterte was elected as president and the people flunked all Otso Diretso candidates in 2019)," Go said, adding he did get hurt with the accusations but has since forgiven Bikoy.

"While I urge our authorities to respect all the constitutional rights of Bikoy, I must also say that the country needs to know the whole truth," he added. (With reports from SunStar Philippines)