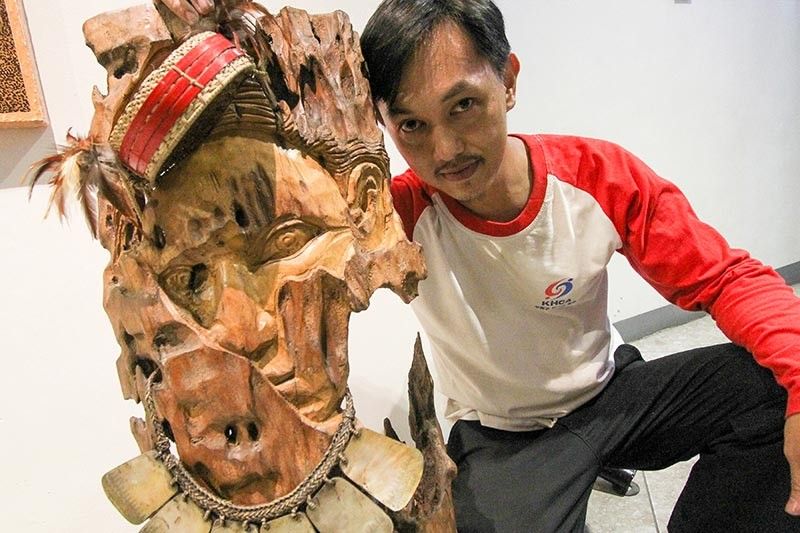 BAGUIO. Clinton Aniversario, with his wooden sculpture dubbed "Not a self-portrait," will be one of the local artists and artworks featured during the Tam-awan International Arts Festival, which opened May 22, 2019. (Jean Nicole Cortes)

TAM-AWAN village once again hosts a five-day festival on art, heritage and talent.

Tam-Awan International Arts Festival (Tiaf), with this year's theme "Flavors of the Philippines," is now on its 9th staging led by Chanum Foundation Inc. and is celebrated every two years in tandem with the National Commission for Culture and the Arts (NCCA).

The festival aims to being together artists, artisans and culture bearers to converge in the city for an exchange of ideas for cultural development.

Exhibit openings at Tam-Awan Village gallery and in SM City Baguio will also open where artists from all over the Philippines will participate.

On Thursday, May 23, a talk on Cordilleran Implements in the Modern Kitchen by Naty Sugguiyao will commence and will be followed by Candy Torres's presentation on Rediscovering the Cordillera Culture through Food.

On Friday, May 24, Marinella Mina will speak on "Containing Cultural Choices: What Ceramics Reveal About our Foods," to be followed by Madonna Ma's talk on "Chinese Influence to the Filipino Cuisine."

May is declared a National Heritage Month and the celebration takes a prime in creating among the Filipino people a consciousness, respect, and love for the legacies of the nation's cultural history.

The national theme for Heritage Month is "Mga Pinuno Para sa Pamana" (Leaders for Heritage) as a challenge to each and every individual to take the lead in preserving and promoting their cultural heritage.