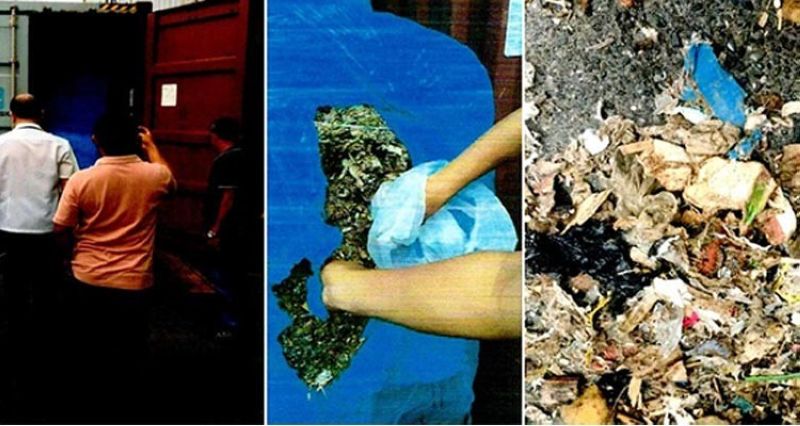 THIS time, the wastes came from Australia.

While the remaining South Korean waste materials are still held at the Mindanao International Container Terminal (MICT) in Tagoloan, Misamis Oriental, another nine 40-footer container vans of imported waste materials from Australia, was held by Bureau of Customs (BOC).

A joint inspection by representatives of BOC and the Environmental Management Bureau (EMB) in Northern Mindanao was made on May 15, but the report came out to the media Thursday, May 23.

As per report of the BOC, the shipment declared that the containers carried “Processed Engineered Fuels (PEFs),” consigned by Holcim Philippines, Inc., to run as power source for its cement plants in Mindanao.

Meanwhile, Holcim Philippines Inc. maintained that they were truthful of their declaration that the said shipment were PEFs.

However, inspectors noticed that the said PEFs turned out to be “municipal wastes,” which suggested that the materials composed of shredded garbage made of different sources coming from plastic, wood, and glass among others.

The BOC added that these products would require the acquisition of an import permit prior to its importation.

The bureau also recommended that the shipment will be issued a warrant of seizure and detention order, citing possible violation of laws such as Republic Act (RA) 9003 or the “Ecological Solid Waste Management Act of 2000;” RA 6969 or the “Toxic Substances and Hazardous and Nuclear Wastes Control Act of 1990;” RA 8749 or the “Philippine Clean Air Act of 1999;” and provisions under Customs Modernization and Tariff Act or RA10863.

Holcim Philippines Inc., in a statement, said it was the Central Office of the EMB that had sent an official letter to BOC port collector John Simon dated May 21, 2019 stating that it has no objections to the importation and use of PEFs as alternative fuels in cement kiln since it is declared as a product that underwent processing prior to shipment to the Philippines.

Holcim added that the EMB Central Office letter added that the materials conform to Section 4 of Department of Environment and Natural Resources’ Administrative Order 2010-06: Guidelines on the Use of Alternative Fuels and Raw Materials in Cement Kilns which is the basis for the “acceptance criteria.”

“We are hoping that this clarifies the confusion regarding this matter. Our company maintains that the materials are PEF and these were accurately and truthfully declared as such,” the statement said.

“Acutely aware of the public outcry against the export of wastes to the Philippines and irresponsible and damaging waste disposal practices, Holcim Philippines’ importation and use of PEF as alternative fuel for its cement kilns is pursuant to its objective of contributing to the ongoing efforts to address the global waste problem,” the statement added.

Holcim also maintained on their advocacy as partner in addressing waste management problem in the country.

“The company uses co-processing technology, wherein qualified materials such as non-recyclable plastics, rubber, textiles, cardboard and wood are used as an alternative to coal in making cement through waste management unit Geocycle,” the statement said.

As for Simon, the BOC is only doing its job.

“May this serve as a lesson to all Customs brokers and importers that may must declare their goods correctly when they file their entry with Customs, and be able to always be compliant to the laws of the land,” he said.