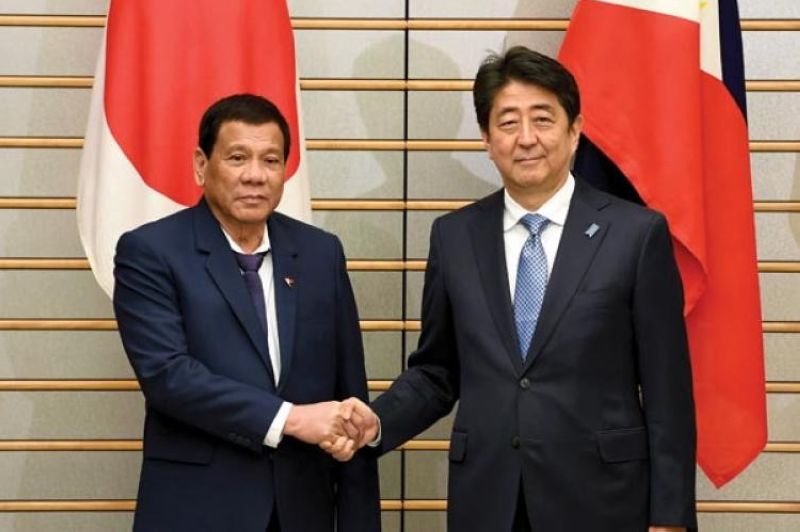 PRESIDENT Rodrigo Duterte and Japanese Prime Minister Shinzo Abe are expected to talk about security and economic issues during their bilateral meeting in Tokyo, the Department of Foreign Affairs (DFA) said on Friday, May 24, 2019.

In a press conference, DFA Assistant Secretary Meynardo Montealegre said Duterte would meet with Abe on the sidelines of the 25th International Conference on the Future of Asia on May 31.

Montealegre said the two leaders are also expected to touch on pressing matters concerning the Southeast Asian region, such as the South China Sea disputes.

"(Duterte and Abe's meeting) will be an opportunity for the two leaders to take stock of the progress of our strengthened strategic partnership in such areas as defense and security, economic cooperation, infrastructure development, the entry of Filipino skilled workers to Japan, (and) Japanese assistance for the development of the Bangsamoro region," he said.

"(They) would also exchange views on regional issues of mutual concern, including the Korean Peninsula and the South China Sea," he added.

Duterte will fly to Japan next week for his attendance to the 25th Nikkei Conference on the Future of Asia, which will be held on May 30 to 31.

Montealegre said the President, in a keynote speech that will be delivered on May 31, would likely emphasize Asia's role in charting its "own future."

"Well, the President will likely assert Asia's role in charting its own future. He will likely also highlight how addressing domestic imperatives provides the conditions by which we will collectively shape Asia's future," he added.