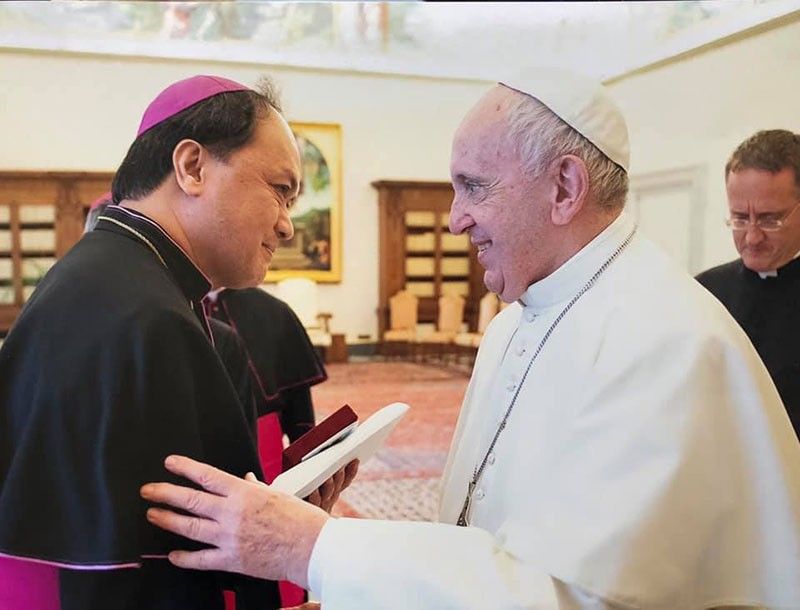 FACED with death threats and the constant tirades by President Rodrigo Duterte, Catholic Bishops Conference of the Philippines (CBCP) vice president Bishop Pablo David received a much needed shot in the arm from no less than Pope Francis.

In his Facebook post, David said that no less than the Pontiff offered his support to the Kalookan bishop, who has been the subject of constant tongue lashing from Duterte, during the recently concluded Ad Limina visit of the Filipino prelates to Rome.

“He looked into my eyes as I spoke. I was surprised when he interrupted me in the middle of my sentence and said, ‘I want you to know that I know your situation; I know what you are going through. I am praying for you. Please continue’,” David recalled of his personal encounter with Pope Francis.

“My eyes blurred with tears when he said that. I had to clear my throat to be able to go on speaking,” he furthered.

The Pontiff’s show of support to David, though, didn’t end there yet as he also gave the prelate a special blessing at the conclusion of the visit.

“On my way out, after I received his gift, I was ready to step out already when he held my arm and said, ‘Wait. Please let me give you a special blessing. I want you to know I am with you as you face trials in your ministry in your diocese.’ Then he extended his right hand to pray over me,” recalled David.

“Then he pulled me to himself to give me a warm paternal embrace, pressing his head against mine, and brushing his hand gently on my back as he whispered into my ears,,’ Courage!’ My heart melted after that. I just said, ‘Thank you, Holy Father’,” he added.

David said his personal encounter with the Pope all the more affirmed his conviction that what he is doing is righteous even though it has earned the ire of Duterte.

“I felt like I had been embraced by Peter himself in his successor, Francis, whose ministry is to confirm his fellow apostles in faith, all over again,” said David.

To recall, David has been a constant critic of the Duterte administration’s war against illegal drugs after the Kalookan Diocese was turned into what the former called as a “killing field”.

In turn, David has been a regular subject of Duterte in his usual tirades against Church leaders of the Philippines, including one when he was called a “son of a whore” as well as accuse him of being involved in illegal drugs.

David had also confirmed getting death threats but refused to directly link them to Duterte. (HDT/SunStar Philippines)