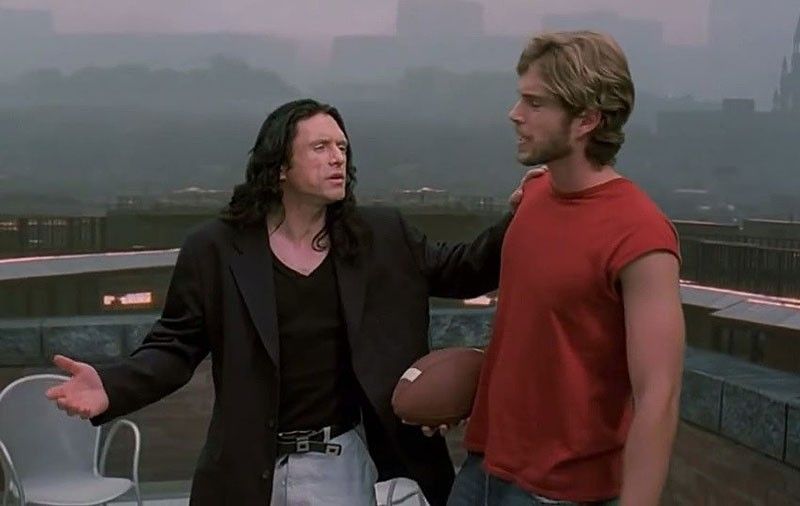 A Still from the original The Room, starring Tommy Wiseau and Greg Sestero. (Wiseau Films)

“WHAT’S the first thing you would do if money wasn’t an issue?”

This was the question I asked some people who happened to be online while I was browsing through Fully Booked one evening. Most of the people I asked said that they’d travel the world, and one girl said that she’ll have to see to her family’s needs first before going globetrotting.

Three gave unique answers, though: one found my out-of-the-blue question to be rather suspicious, another said she’d buy up plenty of art materials (presumably for her masterpiece, good on her), and a friend from Down Under said she’d invest in real estate.

I was half-hoping that one of them would say something like “Why, I’d produce and direct my own full-length movie, and not only that, I’m gonna star in it, and have my BFF as a costar!” Then again, I don’t have Tommy Wiseau as a Facebook friend (well, at least not yet). If this is the first time you’ve heard of him, Wiseau is famous – or perhaps that should be infamous? – for writing, producing, directing, and starring in the 2003 independent movie The Room, which is universally both panned and praised at once for being one of the worst movies of all time.

Greg Sestero, Wiseau’s much-younger best friend and costar, wrote about their experiences working and living together (no, they’re not gay) in a tell-all titled The Disaster Artist, published by Simon & Schuster in 2013. In case you’re wondering, Fully Booked happens to have it in stock. I highly recommend it if you like reading, especially nonfiction.

What’s that? You’re not really into books? That’s perfectly fine – and lucky for you no less than James Franco found out about Sestero’s book and thought it would be a great idea to make a movie about making a movie. And having watched his 2017 adaptation of The Disaster Artist, in which he wears both Wiseau’s appearance and personality like a second skin, I have to say that it was indeed a great idea, especially in the hands of an actor-director as talented and enterprising as Franco.

In the adaptation, Sestero is played by Dave Franco, James’s younger brother. Shy and awkward despite his good looks, Sestero finds himself drawn to his acting classmate Wiseau, who though bizarre and reckless in his speech and mannerisms, nevertheless displays total confidence and boldness not only while acting, but in practically every social situation he finds himself in.

Even as a moviegoer watching this film, you can’t help but feel embarrassed for Tommy Wiseau whenever he makes a fool of himself. For me, the scene that made me cringe the most was when he desperately tries to impress a big-shot Hollywood producer (Judd Apatow in a cameo appearance) by reciting lines from Hamlet out loud during lunch hour in an exclusive restaurant. If watching Franco as Wiseau bumble through Shakespeare makes you cringe in your seat as well, it’s a testament to James Franco’s ability as an actor to play the one man in the world least suited for acting.

For all Wiseau’s overconfidence, it took becoming friends with Sestero for him to finally pursue with a vengeance his lifelong dream of becoming a filmmaker. Wiseau and Sestero may be totally new to showbiz, but they’re sincerely determined to do whatever it takes: make new contacts, purchase equipment, everything. But what about funding though? Sestero and a few coworkers in the cast and crew find out that Wiseau is actually the low-key owner of a chain of successful clothing stores, so they have all the money to burn, so to speak. What could possibly go wrong?

Well, everything. Making movies might look fun, you see, but it’s anything but easy. Says Cagayan de Oro filmmaker Cloyd Winstanley: “Film making is deeper than you think. It’s very personal. It’s a vision... Anyone can make a film, yes, but only a few can touch people’s lives through film.” He’s absolutely right, and the very thought of that is enough to make filmmaking just an idle fantasy and nothing more to most people. However, Tommy Wiseau is not “most people.”

You might be curious to find out more at this point. But if the past month is an indication, one could get unfriended or even beaten within an inch of his life for sharing spoilers, so I won’t do that here. However, what I can share – and must share – is that you might find some scenes in The Disaster Artist to be deeply disturbing. Wiseau doesn’t mince words when it comes to remarking on the women auditioning for The Room, and much worse, he makes nasty comments about his female costar’s naked body... in the middle of shooting a lovemaking scene.

Thus, it’s easy to dismiss Wiseau as a misogynist, but he never meant to hate on women. He only sees himself as a tortured artist finally making it against all odds, and so everything in his project must be perfect (whatever that word means to him). Some film buffs on the Internet even speculate that this rudeness could be a symptom that Wiseau must be a high-functioning and obsessive autistic, especially in light of his managing to put together an entire feature film – terrible, but not unwatchable – on his own without any help from the major studios and despite all difficulties.

In real life, The Room has become a success of sorts. Screenings are always sold out, and Wiseau and Sestero are now cult figures in the moviemaking world and will stay that way for years to come. As novelist Steven Pressfield said, “Stay stupid... [The artist] must be clueless enough to have no idea how difficult her enterprise is going to be—and cocky enough to believe she can pull it off anyway.” It’s hard to see denseness as a virtue whatever the case may be, but after learning about Tommy Wiseau and his travails, perhaps it’ll get a lot easier for you and I both.