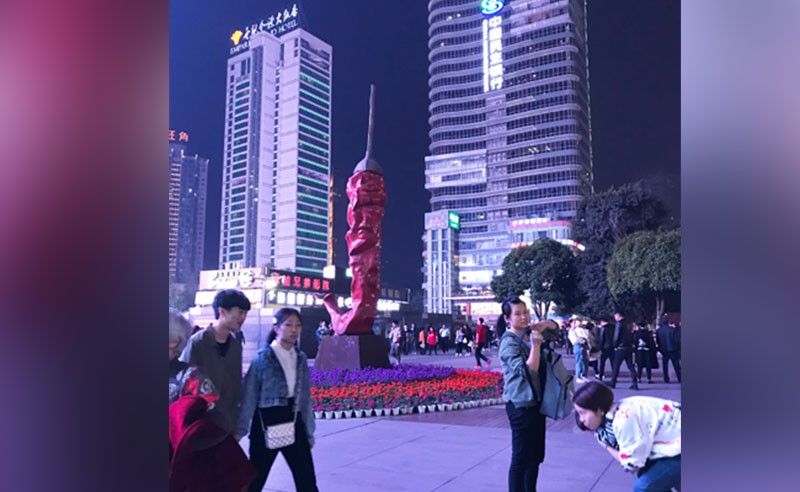 PROUDLY HOT. Chongqing is so proud of its hot and spicy food, it even has a statue of a chili pepper in its plaza. (Stella A. Estremera) 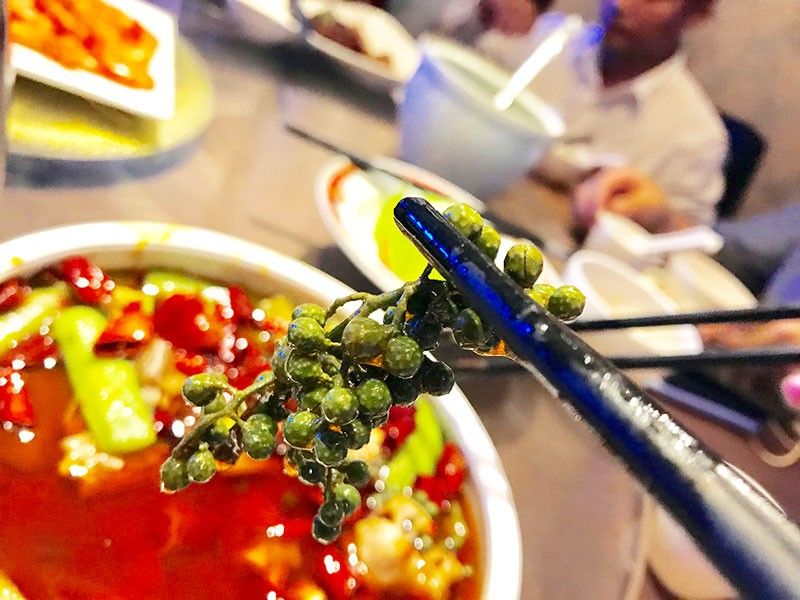 NUMBING SEED. Also known as Sichuan pepper, it is actually not a relative of the peppercorn but the citrus family. (Stella A. Estremera) 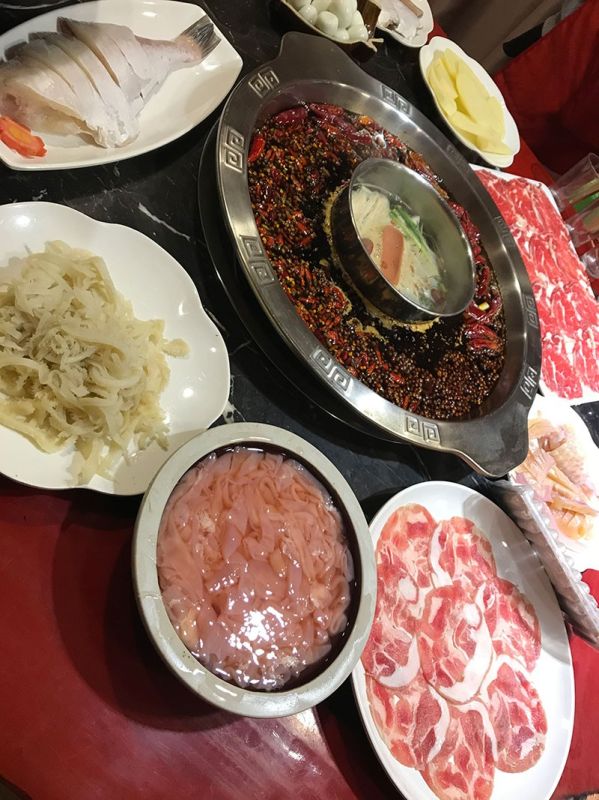 THE REAL HOTPOT. Chongqing is known for its hotpot restaurants, and their hotpot is no joke. (Stella A. Estremera) 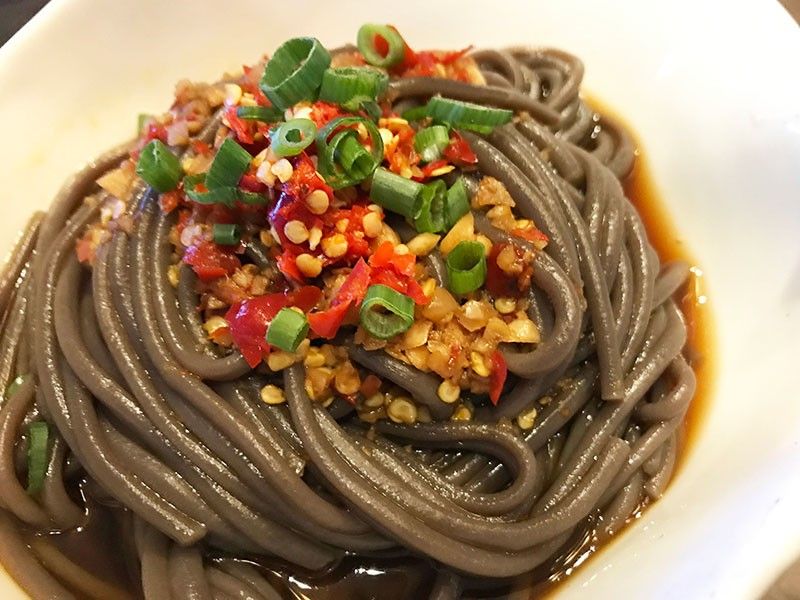 HOT, HOT, HOT. A serving of noodles have hot chili pepper as toppings. (Stella A. Estremera) 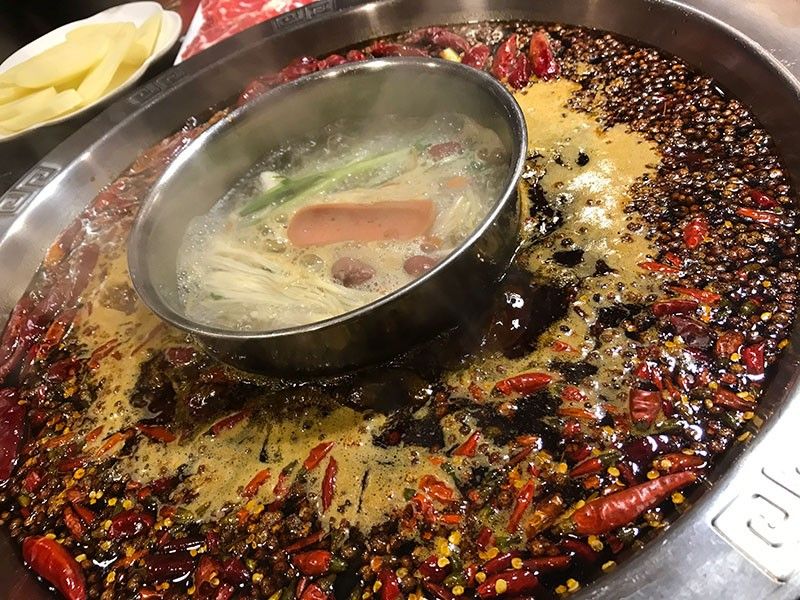 THE REAL HOTPOT. Chongqing is known for its hotpot restaurants, and their hotpot is no joke. (Stella A. Estremera)

WE WERE warned by the Filipina staff of China Radio International upon learning that we were heading off to Chongqing from Beijing.

“Food there is very spicy,” said Machelle A. Ramos.

I shrugged the warning off saying I love hot and spicy food.

Our arrival dinner after a three-hour flight from Beijing showed us how truly hot it is.

Aside from its interesting tourist sites and cool weather, Chongqing is known for its hotpot. And when they say hotpot, it’s not just some steaming hot shabu-shabu pot, but a giant pot full of boiling hot chili peppers with what delivers the wallop in terms of chili hotness – the numbing seed.

I first encountered the numbing seed in my visit to Beijing in 2017 when I curiously picked out the green peppercorn looking stuff in our fried pork ribs and chewed it as our host Amy stared in horror. Her mom used it on them when they were kids, to stop a toothache, Amy said.

I felt numbing of my mouth that spread up to my cheeks. But somehow, the numbing effect made the flavors come alive, and I loved it. Except that in Chongqing, there was maybe a thousand of those seeds in one hotpot...

It was a whole different experience there as we moved from one restaurant to another in our tour of the different facilities in this southwestern China that enjoys its strategic location for trade as it is at the confluence of the giant Yangtze and Jialing Rivers.

Yangtze is bigger than any river you can imagine as not only boats ply its length, even tankers and cargo ships pass through and dock on its banks. That deep and big.

If you are geographically challenged like me and have only known that the spicy food in China can be found in Sichuan or Szechuan, then let’s update our geography: Chongqing city was under the administration of Sichuan province from 1954, but in 1997 it was separated from the province and designated a provincial-level municipality under the direct administration of the central government, the fourth one (after Beijing, Shanghai, and Tianjin) to be established.

Yes, the hot and spicy food of Congqing is a branch of Szechuan. Now, burn.

They’re so proud of their burning hot cuisine, they even have a statue of a giant chili pepper in their plaza. It was one hot viand after the other. Even their wasabi for a lovely roe-packed mackerel sushi delivered a surprise punch, tears literally ran down my eyes. I was more careful next time, putting just a tad of the wasabi sauce, a tiny tad that fit on the tip of my chopstick. Yes, it was that potent and to think I put a lot of wasabi in my sushi here in the Philippines such that my sauce looks like mud.

Overall, it was an extreme adventure of the palate. I could now recognize the aroma of numbing seed and chili as it has been imprinted in my memory awaiting the time I can taste Chongqing hotpot again.