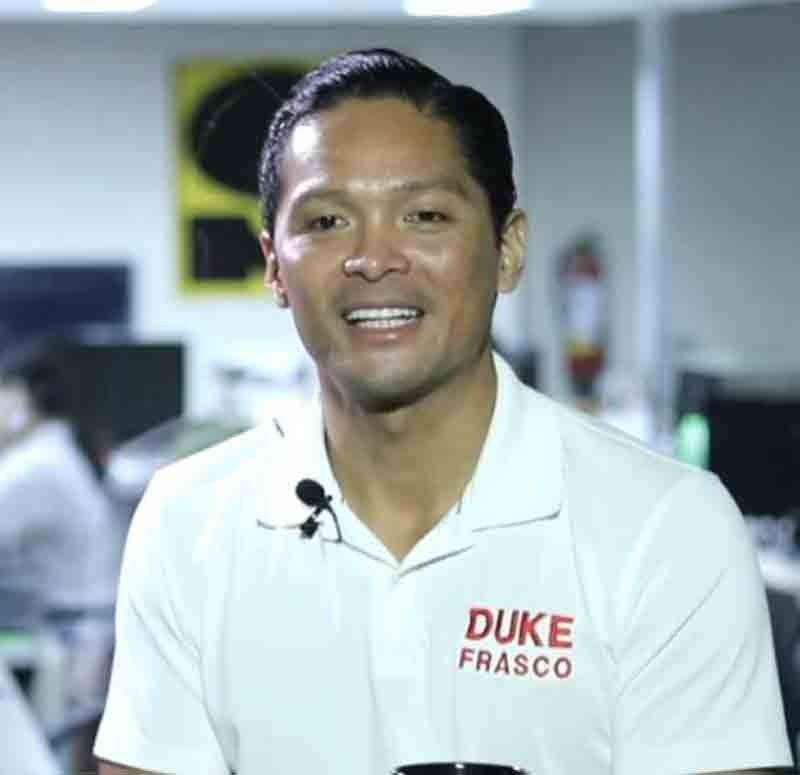 PROJECTS. Duke Frasco, representative-elect of Cebu’s fifth district, has lined up projects to improve infrastructure and the delivery of health and other services in the 10 towns and one city in his district, even if he has allies in only two of the towns. (SunStar Photo)

HE ENDED the 70-year hold of the Durano clan on Cebu’s fifth district by defeating reelectionist Rep. Ramon “Red” Durano VI in the May 13 elections.

But the Duranos’ Bakud Party dominated the races for mayor and vice mayor, taking the seats in nine of the 11 local government units in the district.

Yet, Vincent Franco “Duke” Frasco says this won’t affect his performance as 5th District representative—his project list already full of plans for ports, roads and social services he intends to give his constituents.

Asked how he managed to unseat a Durano, he said, “It’s really the people in the Fifth District who, I think, wanted change, wanted something new and wanted hope for a better future.”

The fifth district is composed of Danao City, and the towns of Borbon, Sogod, Catmon, Carmen, Compostela, Liloan and the four towns in the Camotes Islands—Pilar, Tudela, Poro and San Francisco.

On his plans for the district, “first off, I’m going to really focus on what I campaigned for, which are scholarships for our youth, continue the medical assistance and health program of the 5th District, and also provide opportunity, in terms of work, for the people in the 5th district,” Frasco told SunStar Cebu during a Facebook live interview on Monday, May 20.

As for the first few bills he would file, he said one would be the bill to convert the municipality of Liloan into a city, the others being the pending bills his mother-in-law, outgoing Rep. Gwen Garcia (Cebu, 3rd District), has been pursuing.

Among the benefits of becoming a city are getting a bigger Internal Revenue Allotment.

He said Liloan was almost qualified to become a city, as it could already meet the local income requirement of P100 million per year on average for the past three years.

With its annual population growth of three to four percent, boosted by the in-migration of people due to the town’s many housing developments, he hopes to be able to meet the population requirement by next year.

Frasco was mayor of Liloan for nine years. His wife, Christina Frasco, succeeded him as mayor. She won reelection this year.

She and reelected Borbon Mayor Noel Dotillos are the only mayors in the 5th District who don’t belong to the Duranos’ Bakud Party.

Frasco is now exploring putting up a port in Borbon, the northernmost town in his district.

“The same developer of our port in Liloan is also interested in a port in Borbon. It’s one way for us to ease the traffic in Cebu,” Frasco said.

Last March, a groundbreaking was held for the 1.5-hectare Pier 88 Port Development project in Poblacion, Liloan, Cebu to help solve the traffic crisis in Metro Cebu, as it envisions having three passenger ferries with 300-person capacity taking commuters from Liloan to Mactan, and Liloan to Cebu by sea, declogging the streets.

He said about 10,000 people living in Consolacion, Liloan, Compostela and Danao currently work in the Mactan Economic Zones.

Even if Danao City is ruled by Mayor Ramon “Nito” Durano III, who won reelection last May 13, Frasco voiced his desire to improve the roads in that city.

“We need to make more roads,” he said. “There’s a road we’re looking at. It’s been under study for quite some time now—a road that connects Naga City all the way to Danao. It traverses the mountains. Then there’s another road from Liloan to Asturias. That’s another main artery.... and there are going to be roads that connect to that as well.”

During his time as Cebu Port Authority (CPA) commissioner from February 2017 to October 2018, Frasco said the CPA continually provided the Danao seaport with the necessary maintenance budget and also development.

“Before, there was only one place where boats could anchor or dock. Now, we built another one,” he said.

Frasco said he would put up satellite offices in the different towns in his district where his constituents could avail themselves of free medicines.

“We’re now looking for offices in the entire district. We have an office, of course, in Liloan. We have possible offices already in Danao, Compostela, and in the other municipalities as well. So I plan to have a person there to represent me, and also mo-atubang sad sa mga (to attend to the) concerns of the people,” he said.

There will be one office per town, and the office may even be located in the town hall itself.

“For example, the mayor of Borbon has offered that we have an office in his municipal hall. So I said, ‘Ok, Mayor. Let’s help each other with that,’” Frasco said.

The incoming congressman said he could download the funds to the local government to implement the program, or channel the funds through national agencies for downloading to the Vicente Sotto Memorial Medical Center in Cebu City that many people in his district still prefer to go to.

The reason is that while there are district hospitals in Danao, Sogod and San Francisco, these lacked “medicines, supplies, even doctors”—a situation he hopes the incoming governor can rectify.

Among the other things Frasco aims to provide his constituents are multicabs that could be used by barangay health workers (BHW) and barangay tanods, or for emergencies.

“With regard to the promise that I made to give a multicab or multipurpose vehicle to every barangay, I don’t think it’s impossible because there have been congressmen in the past that have done it,” Frasco said.

He believes that despite the Supreme Court’s striking down of the pork barrel of legislators as unconstitutional in 2013, there’s still the P70 million a year allocation for each congressman.

He also wants to replicate in the fifth district what they are doing in Liloan, which is to have the city or town give a counterpart to the allowances given by the barangays to their BHWs and tanods (watchmen).

He also plans to host job fairs at least once a year in the different municipalities.

Will his lack of allies in the fifth district affect his performance as a congressman?

Asked if political alliances would influence his decisions in allocating funds, he said the allocations would depend on where the projects would be needed most, and “as I see it, it’s needed in the entire 5th District.”

“So if magpili-pili ko as early as now, then ako ray magproblema ana inig sunod election, kay naa pa may sunod na election,” he added. (So if I discriminate as early as now, I would be the one to have a problem in the next election because there will be another election.)