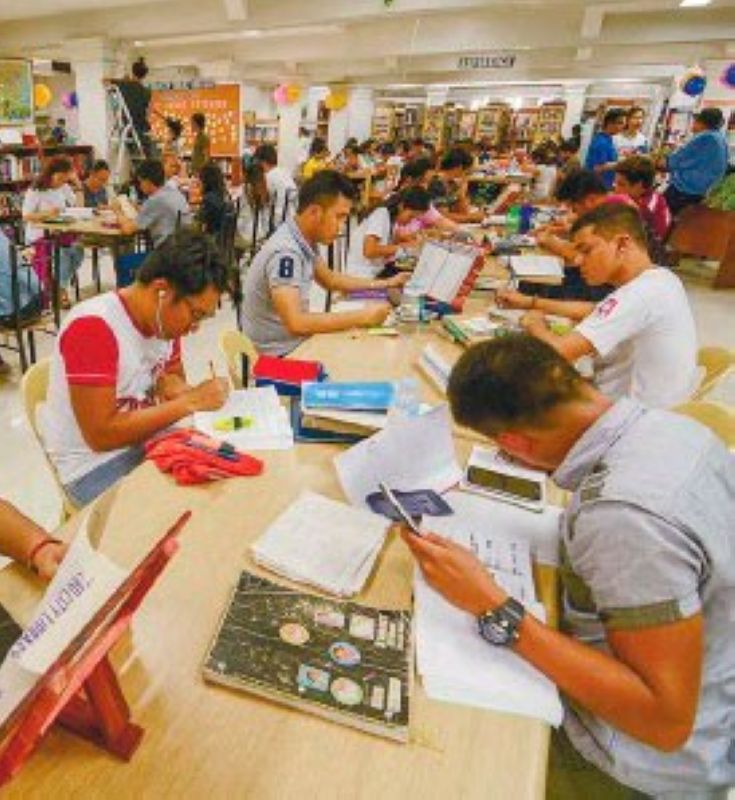 FILL THE GAP. A working democracy owes no small obligation to public literacy, creativity and expression of ideas. Public libraries and reading centers should be raised higher in the list of priorities for public funding. (File Foto)

The recent excellence of the Cebu City Public Library in serving the public may be the highlight in its 100 years of existence, a milestone made last April.

Since March 2018, the library, also known as the Jose Rizal Memorial Library, has operated for 24 hours after Cebu City Mayor Tomas Osmeña responded to Cebu Institute of Technology University student Mitch Roldan’s request, posted on the mayor’s Facebook page, for the library to remain open as an alternative place for students who are constrained by budgets and limited hours from studying in fast food outlets.

The 24-hour operations of the library, complemented by internet access, improved library assistance and security measures, have boosted the number of visitors by 296 percent, the 103,000 visitors recorded at the end of 2018 jumping from the 26,000 who visited in 2017 when the library operated for only 40 hours a week.

Beside being a haven for all kinds of visitors, from students needing a place to carry out their school work to retirees and tourists interested to read and know more about local history, the library has become a cultural hub, offering free limited slots to citizens signing up for Korean language classes in February, Japanese classes in March and Spanish classes in April.

Last March 21, the National Library of the Philippines and the Asia Foundation recognized the Cebu City Public Library as the country’s top performer.

Spearheaded by the Cebu Citizens-Press Council, local journalists and book lovers donated books and references on journalism. Another nongovernment organization, the Basadours, schedules storytelling and reading sessions with children.

To quote the British envoy, the Cebu City Public Library demonstrates how a library can be more than a “repository of books.” Despite naysayers saying a library has been made obsolete in the age of Google, this public library proves it has a continuing relevance in communal life altered by internet surfing and digital reading.

The collaboration of public, private and civil society stakeholders to reinvigorate the Cebu City Public Library as a cultural hub shows how innovations can concretize the spirit of the Philippine Library Law, or Republic Act (RA) 7743. Signed on June 17, 1994, RA 7743 mandates local governments to build and maintain public libraries and reading centers.

Coordinating with the National Library and the Department of the Interior and the Local Government, the development councils are tasked to establish public libraries in cities and municipalities and reading centers in barangays.

RA 7743 implies that local executives should exercise the political will to include the establishment of a library or a reading center in their development plans. While the law mandates that the National Library supplies standard references to these public libraries and reading centers, local executives must be innovative in appropriating funds and resources to operate a library.

Since RA 7743 was passed, major shifts have changed and affected how the world accesses, processes and uses information. The need for literacy and creativity remains unchanged and as urgent as ever.

The Cebu City Public Library shows successful practices of a local government in operating a public library in cooperation with private stakeholders and civil society. The new administration running Cebu City Hall takes on the challenge of sustaining the library’s services to the public. Included in these needed innovations are library services sensitive to the needs of the disabled.