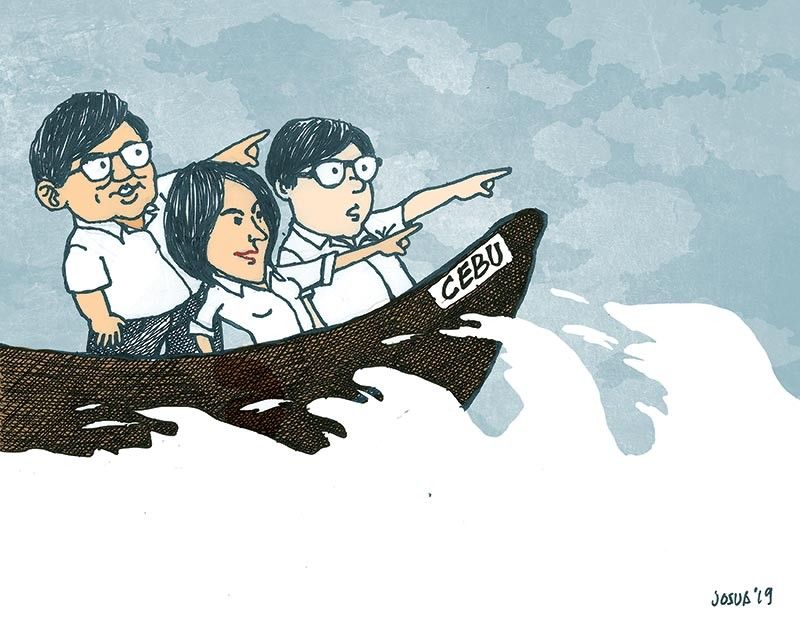 THE powerful triumvirate doing a hand-stack for a photo opportunity during the Unity and Solidarity Meeting last Saturday, May 25, for one moment appeared like a dream team poised for a big win. It brings to the fore an image of optimism for Cebu’s economy.

Dino, in a statement, emphasized Cebu’s need for “a united political front to really effect change.” He said: “Now that the national leadership and political alignment in the Province of Cebu and Cebu City are one, with the backing of our dear President Duterte, I can definitely say that the next three years for the entire Cebu and its people will be phenomenal.”

The alignment augurs well for the eventual creation of the Metro Cebu Development Authority (MCDA). As Dino said, the body may soon have its “breath of life” with friendly chief executives at the helm. The Metro Cebu Development and Coordinating Board had been pushing for the approval of an executive order creating the MCDA, which “will act as the overall body to oversee services that have multi-local government unit or metropolitan-wide coverage.”

It should be noted that in 2017, Cebu City North District Rep. Raul del Mar pushed for House Bill 6227, which sought the creation of the MCDA, which passed the House committee on rules. Under his bill, the MCDA shall comprise the core cities of Metro Cebu, namely, Cebu, Mandaue, Lapu-Lapu; the cities of Talisay, Danao, Naga and Carcar, including as well the towns of Consolacion, Liloan, Compostela, Minglanilla, Cordova, and San Fernando.

Del Mar’s bill hit a wall at least twice with opposition from some local officials and congressmen.

These are problems not only related to growth, but also due to the inability of our leaders to put their act together for reasons confounded by too much politics.

Dino mentions the Cebu Integrated Intermodal Transportation System (CIITS). It will set up a rail backbone from as far south as Carcar and to the north in Danao City. The bus rapid transit system feeds passengers into the portals of the train system.

The governor-elect sees the feasible tapping of surface water and more dams to augment bulk water supply for the metro and the Province’s agricultural areas.

“As we utilize perhaps Kawasan Falls in Badian or we try to look into the western part of Cebu, all of these might be tapped in order to address the need and not just for Metro Cebu, but including other barangays that still need level III water supply, that in this day and age, are still getting water in a deep well when we have so much water here,” she said.

On informal settlers, Dino said the National Government, in coordination with the local government units, aims to build 100,000 socialized housing units in Cebu in the next three years.

We also hope for the active participation of private sector expertise in setting Cebu for that supposed big leap.