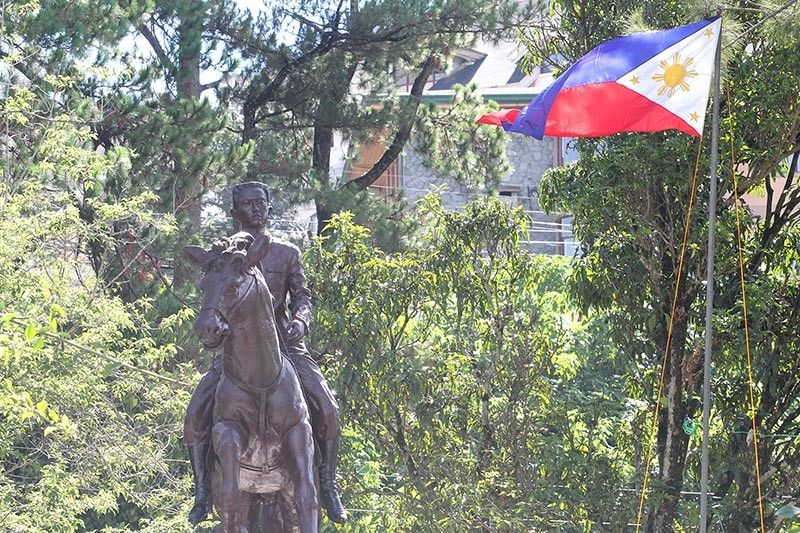 BAGUIO. The Philippine flag unfurls at the Emilio Aguinaldo Memorial Shrine in Baguio City on May 28, 2019 as the country commemorates the National Flag Day. On the same day, 121 years ago, the Philippine flag was first unfurled after the Philippine Revolutionary Army defeated Spanish forces in a battle at Alapan, Imus, Cavite. (Jean Nicole Cortes)

LA TRINIDAD, Benguet -- Mayor Romeo Salda is thinking of crafting a memorandum for stakeholders of this town to allot one minute of their time to pay respect to the Philippine flag.

"The flag should be respected," Salda said Tuesday, May 28.

He said under the memorandum, police and government personnel will be tasked to stop vehicles and people passing by the municipal building during flag raising ceremonies.

Once every three months or when the color of the flag fades, the town will change the flag. In addition, flags should be brought down during rain, he added.

La Trinidad and Benguet province joined Tuesday, May 28, in the simultaneous flag raising to commemorate the 120th year when the first flag of the country was raised after the Filipino revolutionaries defeated the Spaniards in the Battle at Alapan, Imus, Cavite.

The "Stop and Salute" campaign was led by the Salute To A Clean Flag Movement. All Filipinos are encouraged to display the Philippine flag in all offices, agencies, and instruments of government, business establishments, schools, and private homes throughout this period.

On May 23, 1994, President Fidel Ramos issued Executive Order 179, stretching National Flag Day into an extended period, from May 28 to June 12, culminating in the celebration of Independence Day.

La Trinidad Municipal Police Station chief Jeoffer Banglayan said the flag raising is a reminder for the stakeholders to be proud in displaying the national flag and reflect deeper appreciation for what it stands for.

Pastor John Fianza, in his speech, discussed the colors of the Sun to the words of God. He also narrated the Philippine national flag design with the three stars representing the three islands of the country, Luzon, Visayas and Mindanao.

The eight rays of the sun symbolize the first eight provinces that revolted against Spaniards.

The blue color represents peace, red represents blood of ancestors who sacrificed the lives, and white for purity.