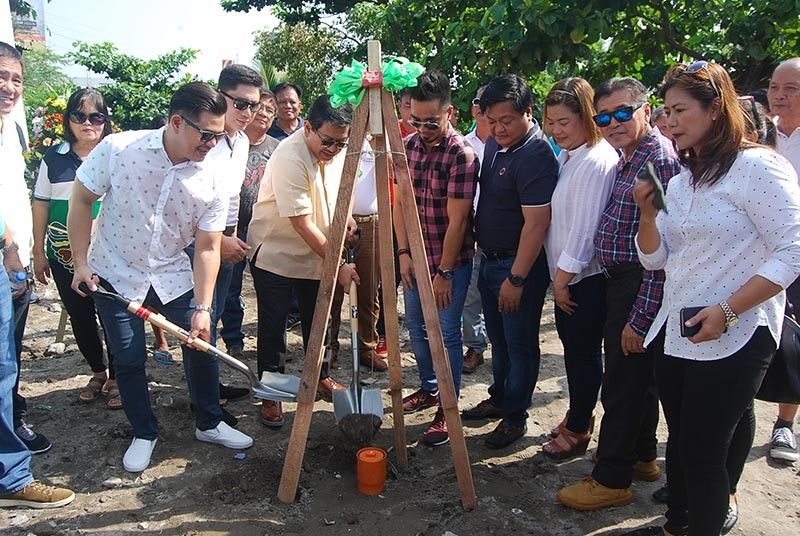 PAMPANGA. Angeles City Mayor Edgardo Pamintuan and the Department of Public Works and Highways represented by District Engineer Celestino Polintan led the time capsule-laying for the construction of the first phase of the Abacan Highway (NLEX-SCTEX Connecting Road) that will link Barangays Pulung Maragul and Pandan to Balibago and Ninoy Aquino. Joining them during Wednesday's (May 29) ceremony are the incumbent city councilors, local government and barangay officials, and representatives from the RII Builders Incorporated. (Angeles City CIO photo)

THE Angeles City Government, under the leadership of Mayor Edgardo Pamintuan, led the groundbreaking and time capsule-laying of the Abacan Highway during a ceremony held Wednesday, May 29, in Barangay Ninoy Aquino.

The P236-million road development project, with an official name "NLEX-SCTEX Connecting Road," will be of support to the furniture, Information Technology and Business Process Management (IT-BPM), hotels, garments and textiles industries of the city.

The project was lobbied by Pamintuan and other key officials to DPWH Secretary Mark Villar in 2017 together with five more big ticket infrastructure projects for the city.

Pamintuan said the idea of developing the Abacan Riverbank Growth Corridor with a linear road stretch is part of the "Sikluban" Project of the City Government. The concept was anchored from the official entry of Angeles City to the Livable Cities Design Challenge in 2014.

The artist's perspective of the project exhibited a modern take on road development as it features bicycle lanes and long stretch of promenade linking all six villages traversed by the Abacan River.

"This is the start of something big in terms of addressing our traffic woes in the city. This alternative highway will greatly help ease traffic congestion in the areas of Pandan and Pulung Maragul as we connect the east and west ends of the city via this," Pamintuan said.

The construction of the first phase, which amounts to P27.8 million, is set to begin in June. The initial phase will cover and link barangays Pulung Maragul and Pandan to Balibago and Ninoy Aquino, as well as the Abacan Bridge via loop.

City Engineer Donato Dizon said the highway is expected to be completed in November 2019 (180 calendar days) with R-II Builders as the contractor of the said project.

For his part, Pamintuan guaranteed the continuity of the project whoever sits as the local chief executive, as it secures annual appropriation from the national government through the General Appropriations Act.

"This is not a dream anymore. We have laid the foundations of the project and secured funding for it. In behalf of the people of the city, I would like to express my thanks to President Rodrigo Duterte and to the DPWH Headed by Secretary Villar. This will surely help us in completely changing the landscape of the city," he said.