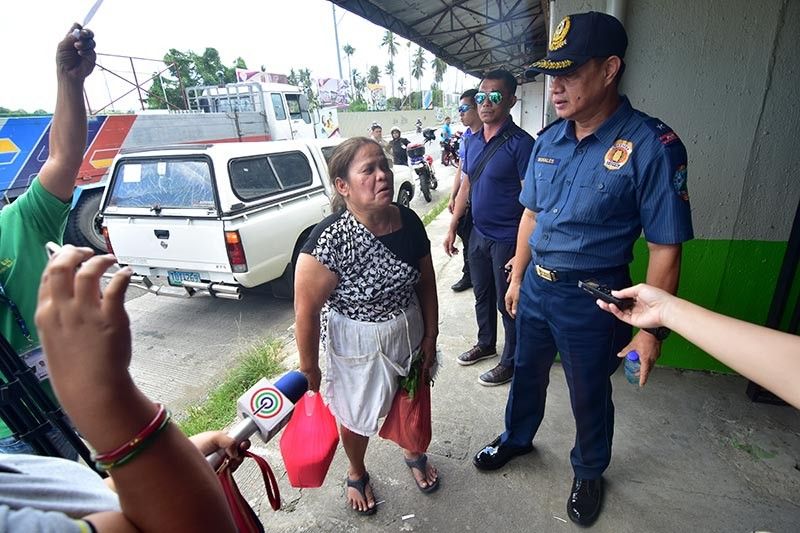 DAVAO. Annie Tapere, one of the investors of Jogle Innovative Marketing. (Macky Lim)

ANNIE Tapere, 53, expressed dismay when Jogle Innovative Marketing was advised to temporarily halt its operations Wednesday, May 29, after the firm failed to present necessary documents.

Despite the risk, it was her first time to invest in a financial scheme and she was disappointed with how things turned out Wednesday, May 29. She said in an interview that she was only enticed to invest because it is "trending" nowadays and she heard many of her friends who have already received hefty returns.

This motivated her to try her luck, and at the same time brushed off advisories from authorities against these schemes.

"Medyo nakulbaan. Dili bya lalim mangita ug kwarta (I was worried because it's not easy to find money)," she said.

She came to Jogle office, located in Roldan Village, Barangay Maa, Davao City, carrying a plastic bag of rice on the right hand and vegetables on the left hand.

She was still wearing her apron when she arrived at the office. She is working at the meat section in a city public market. Upon learning what happened, she felt disappointed.

Tapere invested money amounting to P15,000 on Monday, May 27, when Jogle started to operate and she was promised that within 45 days, the money will grow four times. By July, she is expecting to have her payout but with what happened, she wants to pull out her investment.

"Nakuyawan, nadismaya. Ang amoa lang mabalik lang ang among ma invest (I am surprised and disappointed. All I want now is to get the money I invested back)," she said.

Police Regional Office (PRO) Davao Director Marcelo Morales, who led the surprise inspection of the investment company, said the establishment failed to show them a license to operate.

"Wala pa silang license to operate. Hindi sila pwedeng mag-engage sa business activity. Pwede sila mag open lang pero hindi sila pwedeng tumanggap ng mga clients na mag-iinvest ng pera kasi hindi pa sila licensed (They are not allowed to do business yet because they do not have a license to operate. They can remain open but they are not allowed to receive clients)," Morales said.

He said surveillance on the proliferation of investment schemes in the region is still ongoing.

In Davao region alone, based on police monitoring, there are around 10 financial schemes operating.

For her part, Janeth Garcia, representative and one of the investors of Jogel, cried foul of the "scam" allegation, saying their permit is still being processed.

She said they indicated on their application that they are both involved in wholesaling product, networking product, and capital investment.

She said their company started in 2016 and originated in Tagum City. They have a business permit in Tagum City but not in Davao City.

"Aware man gyud ta sa ing-ani nga scam or what, unfair sa amoa nga nag-legit kay kanunay ma-ingnan mi sa scam or what. In our registration since 2016, mag 2019 nata ron bisag isa ka tao, walay nagreklamo sa amoa. Sa side sa amo, it's so unfair (It's unfair for us to be tagged as a scam because we are legitimate. We have not received any complaints since 2016)," Garcia said.

Asked on how they would double or triple the investment of their investors, she said it depends on the product sales, adding the sale will be divided among their investors.

She said Jogle is involved in manufacturing and distributing products that are Bureau of Food and Drugs-approved and have manufacturing permit. Within 45 days, they will return the investment after they network the product.