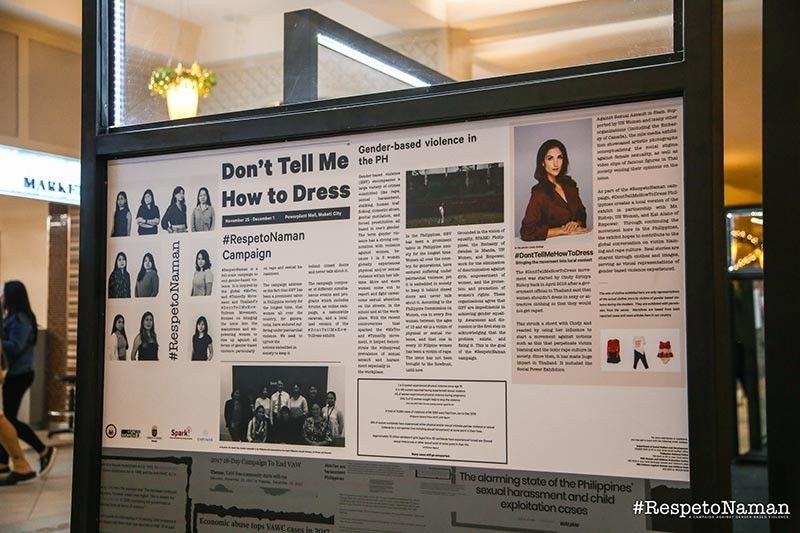 Dubbed as #RespetoNaman, the campaign will feature an exhibit showing clothes worn by survivors of sexual harassment and abuse at the time of the incidents.

The exhibit's name took inspiration from Thailand's similar movement, #DontTellMeHowToDress, that was spearheaded by Thai-American TV

While the United States' #MeToo movement in 2017 has encouraged survivors to speak up against perpetrators, Spark Philippines' #RespetoNaman campaign seeks to combat the rape culture that is prevalent in Philippine society by reducing, if not eliminating, the perceptions of victim-blaming.

The campaign also underscores the message that women should not be blamed for what they wear and how they act once their safety, security, and privacy are threatened.

The organization initially introduced the campaign by setting up the same exhibit at Powerplant Mall in Metro Manila during the 16 Days of Activism against Gender-Based Violence last year. It started from the International Day for the Elimination of Violence Against Women on November 25 and concluded on Human Rights Day on December 10.

The exhibit displayed 13 clothes, with corresponding stories posted on panels.

"The stories and clothes on the panels mostly came from the survivors themselves," said Kassandra Barnes, program manager of Spark Philippines.

"We had a couple of focus group discussions with our psychological consultant and the survivors to be able to represent their stories in the most truthful way and to debrief them on their experiences," Barnes said.

The preliminary results of the 2017 National Demographic and Health Survey, published in an article on the Philippine Statistics Authority's website last March 2018, reported that one in four women have experienced spousal violence.

But although facts are given, Barnes believes these are limited.

"There is a significant number of women who choose not to report incidents because of the stigma that surrounds victimhood," she said. "The trauma of their experience leaves long-term psychological and emotional damage that, if not attended to, will affect their lives."

She added, "These things are happening all around the country, and we knew we had to do more."

Survivors' accounts will be detailed further in the upcoming exhibit.

Spark Philippines intends for this campaign to be an initiative for awareness. As it started as a local addition to similar movements in the USA and Thailand, the organizers are taking measures to sustain this advocacy throughout the country.

Awareness for the Philippines

"We will be starting on our nationwide regional launches from Mindanao all the way back to Luzon beginning this 2nd of June in CDO," Spark Philippines Executive Director Maica Teves said in a press release.

The organization is targeting Iligan, Cebu, Dumaguete, Bacolod, Iloilo, Naga, and Laguna as potential venues for the campaign and exhibit.

"We want to target at least two locations each in Mindanao, Visayas, and Luzon," Barnes said.

The exhibit in Cagayan de Oro City will take place at Centrio Mall, and is also planned to last for 16 days. Activities that will complement the exhibit include the participation of youth leaders in the Emerging Young Leaders Against Gender-Based Violence Dialogue.

By June 17, the exhibit will move to Xavier University where it will serve as an educational installation until the end of the month.

Hoping for the initiative to encourage women all over the country to stand against violence, Barnes said, "We want women to know that they are not alone. Together, we will fight for our rights and respect."

"Now, more than ever, is the time to shift the narrative, end victim-blaming, and call for respect for women not because of what they wear or how they act, but by virtue of their being human," she added. "As a nation, we're saying, 'RespetoNaman.'"