Marian devotee’s gift to Pope: Portrait of Our Lady of the End Times 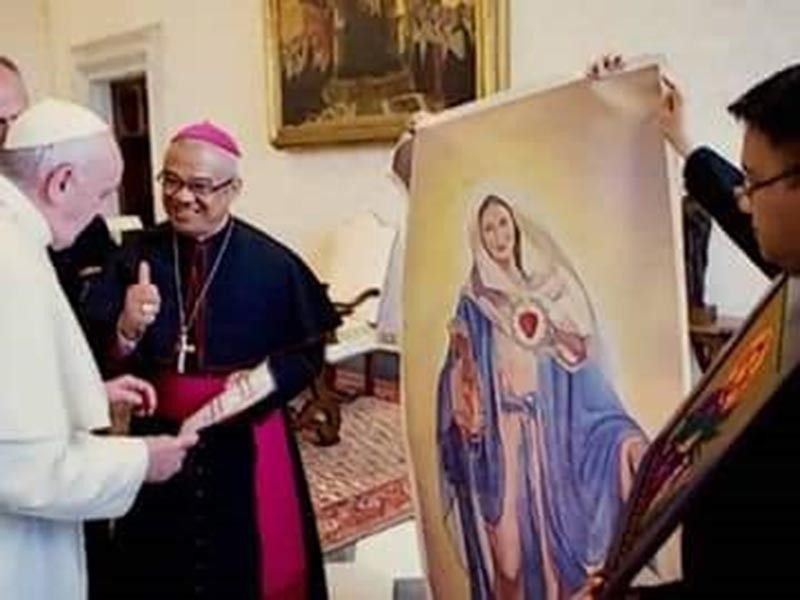 San Carlos Bishop Gerardo Alminaza turns over the portrait of the Our Lady of End Times (The Blessed Mother) to the Holy Father Pope Francis in Vatican on May 27, 2019. This portrait was painted by artist Niño Emmanuel “Edsol” Tapuela of Bacolod City. (Photo by painter/artist Niño Emmanuel Tapuela) 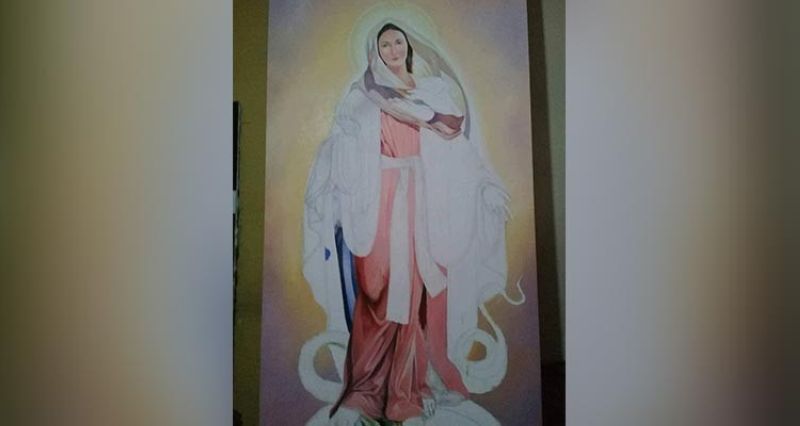 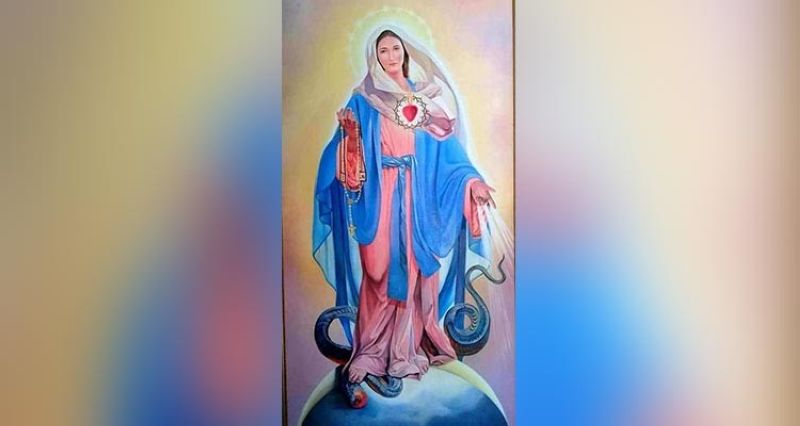 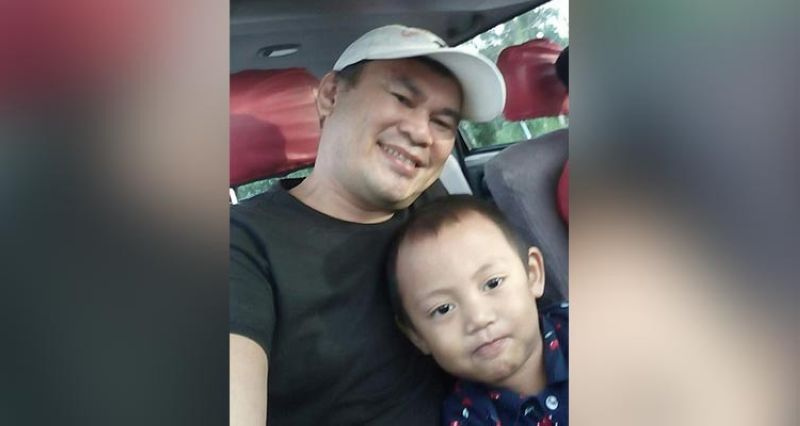 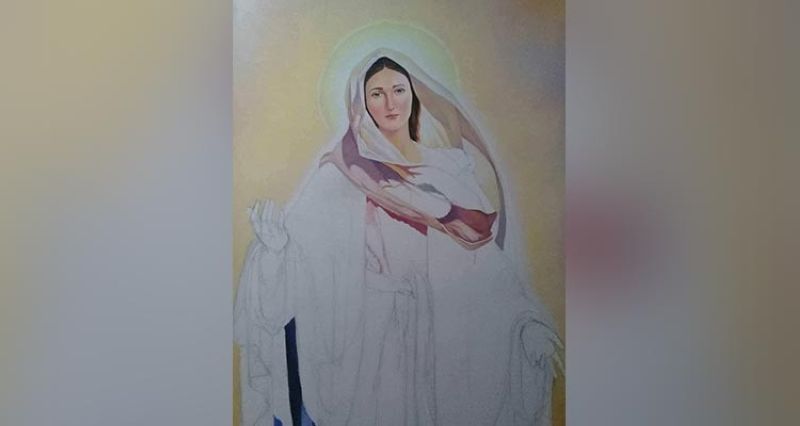 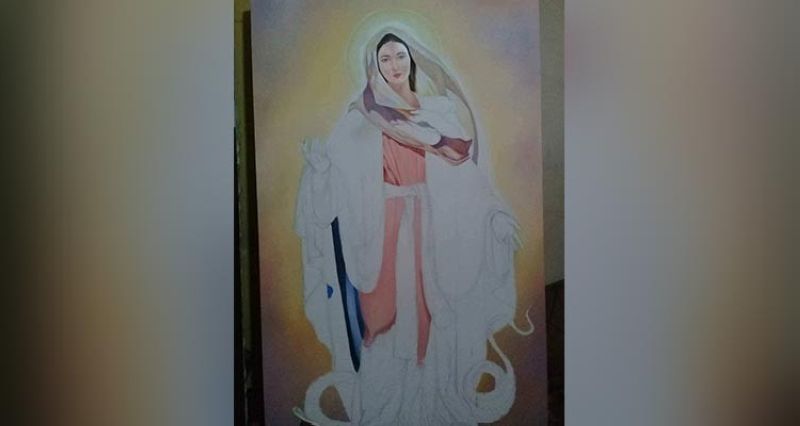 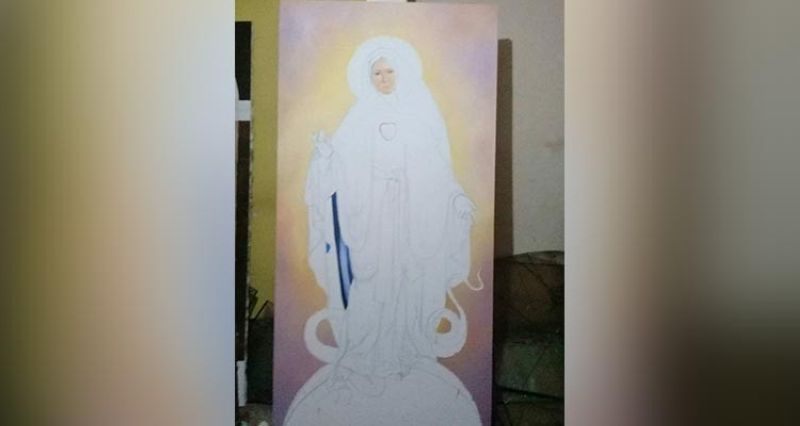 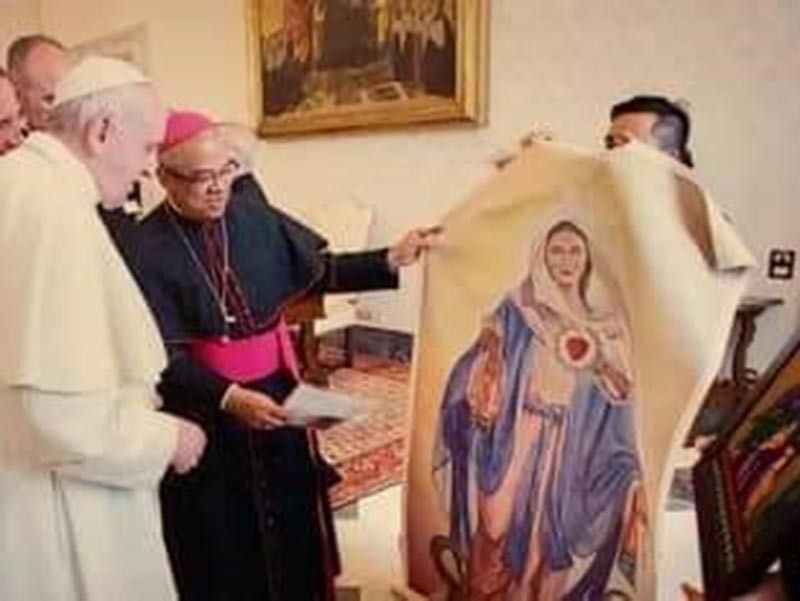 San Carlos Bishop Gerardo Alminaza turns over the portrait of the Our Lady of End Times (The Blessed Mother) to the Holy Father Pope Francis in Vatican on May 27, 2019. This portrait was painted by artist Niño Emmanuel “Edsol” Tapuela of Bacolod City. (Photo by painter/artist Niño Emmanuel Tapuela)

A BACOLODNON painter and Marian devotee Niño Emmanuel “Edsol” Celestial was inspired to paint the portrait of the Our Lady of the End Times (The Blessed Mother) where the said portrait ended up in the hands of the Holy Father Pope Francis on May 27, 2019 in Vatican, which was personally carried by San Carlos Bishop Gerardo Alminaza.

He dreamt of it four times.

Celestial has been painting portraits that have religious significance. He is also the owner of the wooden image of the Blessed Mother who shed tears inside their small chapel in Bacolod City.

The Holy Father appreciates such precious gift upon receipt of it.

It was also the time that the Holy Father issued his message for the 53rd World Communication’s Day which will be celebrated in the Philippines on June 2, 2019 as shared by Bishop Alminaza.

The Holy Father, Pope Francis, called on all the faithful to promote the use of the internet in the service of encounter between persons and solidarity among all.

Dubbed with the theme, “We are members one of another (Eph 4: 25), from social network communities to the human community”, he presented the movement from the dynamism of social media to the net of authentic personal human relationships using three metaphors: net, community, and the body its members.

The Holy Father described the media environment as “so pervasive as to be indistinguishable from the sphere of everyday life.” It has proven to be one of the areas most exposed to disinformation and to the conscious and targeted distortion of facts and interpersonal relationships, which are often used to discredit people.

The “net” which was the basis of the internet to begin with, “is a multiplicity of lines and intersections that insure its stability in the absence of a center, a hierarchical structure, and a form of vertical organization.”

“We need to recognize how social networks, on one hand, help us to better connect, rediscover, and assist one another, but on the other, lend themselves to the manipulation of personal data, aimed at obtaining political or economic advantages, without due respect for the person and his or her rights,” explained the Holy Father.

On the metaphor of community, the net also symbolizes community that is much stronger if it is cohesive and supportive, animated by trust, and pursues common objectives.

Social media communities are not automatically synonymous with community. “Often, they remain simply groups of individuals who recognize one another through common interests or concerns characterized by weak bonds. We define ourselves starting with what divides us rather than with what unites us, giving rise to suspicion and to the venting of every kind of prejudice (ethnic, sexual, religious, and other)... The net becomes an instrument to exhibit personal narcissism,” the Pope observed.

Exposing the illusion that social web can completely satisfy relationships, the Pope warned: “Young people run the risk of becoming social hermits who risk alienating themselves completely from society.” He underscored the serious responsibility to promote its positive use through a third metaphor.

On the metaphor of the body and its members, quoting from Ephesians: “For we are members of one another” (Eph 4:25), the Holy Father added that “this is our identity, based on communion and on “otherness”. “We are members of one body which head is Christ; what we learn from Christ leads us to discover otherness in a new way, an integral part and condition of relationship and closeness,” the Pope clarified.

Stressing on the communion of love among the Divine Persons of the Holy Trinity, the Holy Father called on all to invest in relationships, in the interpersonal nature of humanity in and through the network.

“From God who is Trinity, the person is distinguished from the individual. In order to be myself, I need others. The person now has a face turned toward the other and engages with others. Our life becomes more human, less individual and more personal,” the Pope explained.

The Holy Father underscored the importance of “encounter in the flesh”: “Families meeting at table and looking into each other’s eyes ... a church community coordinating all activities through the network and celebrates the Eucharist together... the net becoming an avenue to share experiences of beauty or suffering to pray together...” all these become resources for communion.

“To open ways to dialogue, for smiles and expressions of tenderness... this is the network that we want, to protect the communion of people who are free. Unity is not based on “likes”, but on the truth; on “amen”, by which one clings to the Body of Christ and welcomes others,” the Pope concludes.