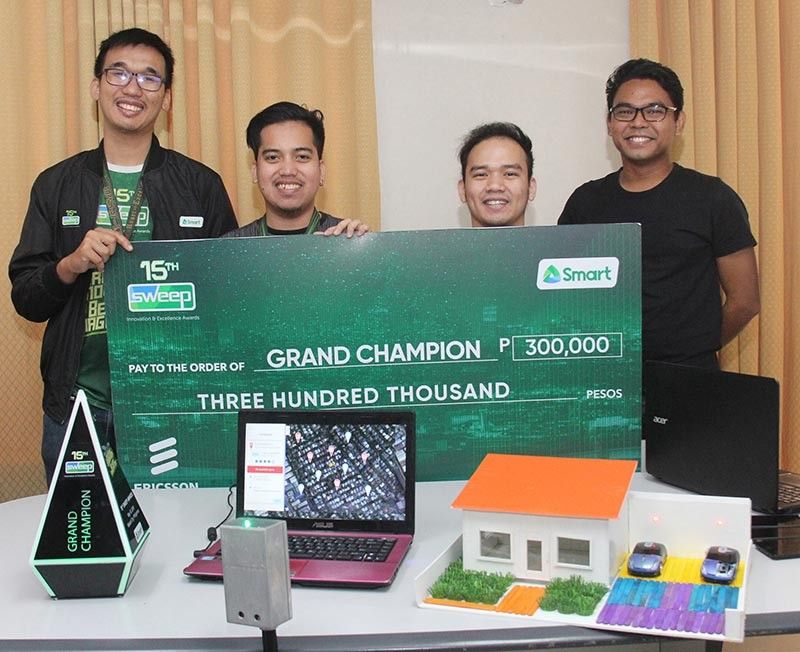 PARKING spaces in the Metro are getting more scarce and finding one can be frustrating and time-consuming.

That’s why students of the University of San Jose-Recoletos (USJ-R) have come up with CarSpace, an app that enables users to locate vacant parking spaces in real time using a mobile device.

The minds behind the app are Kevin Cerdon, Noel Daniel Seldura, and Jesury Thomas Gadiane, second year students of the College of Information, Computer and Communications Technology (CICCT).

Of the 163 entries that joined the competition, 10 were chosen to be part of Sweep’s boot camp, which allowed participants to interact with the country’s leading innovators and businessmen.

The developers described their idea as similar to Airbnb, but for cars.

The app allows users to find vacant parking lots in a particular range and tells drivers how many vacant spaces are in an establishment or lot. CarSpace also allows users to know the parking cost.

A proximity sensor will be installed in lots to detect vehicles. A green light signifies an available space while a red light means it is taken. This information is then sent through a cloud through their servers to update the map within the application.

Seldura first thought of the idea when he had a hard time finding a parking space in the city.

“I’m a driver, too, so I know how it feels. I was also inspired by the traffic initiatives of the Cebu City Government. I then thought, what can I do to help?” Seldura said.

One of the highlights of CarSpace is that households can turn their garage or lot into a prospective parking area.

According to Cerdon, the concept of having an app like CarSpace will not only be cost-effective for drivers, it will also be a good opportunity for households to earn a passive income.

“In our pitch, we pegged each system at P2,000. This already includes installation. On each system, there are already two sensors,” Cerdon said.

CarSpace will charge lot owners a minimum mark-up percentage from the profit they earn.

For mentor Eric Magto, a USJ-R faculty member, there really is a demand for an app like CarSpace in the market.

“Our challenge now is how can we translate this concept into reality,” Magto said. “If we just bottle this concept up, you’ll only end up just loving your idea. Your customer will only be yourself.”

Although there are similar parking apps in the market, they believe that their idea outweighs their competitors in functionality and convenience.

Gregg Gabison, CICCT dean, said he anticipated that the team would be included in the top three of the competition as he found the project functional and went with the flow of disruptive technology.

“It’s a peer validation of the schemes that we’re doing in our college. I appreciate all their hard work. It was a compounded effort from our students and the advisers,” Gabison said.

The students believe that their idea has the potential to branch out (motorcycle-friendly iterations of the app, in-app payment schemes), but they want to focus on their studies and to expand their knowledge on the business side of things.