Looking for oil in Northern Cebu 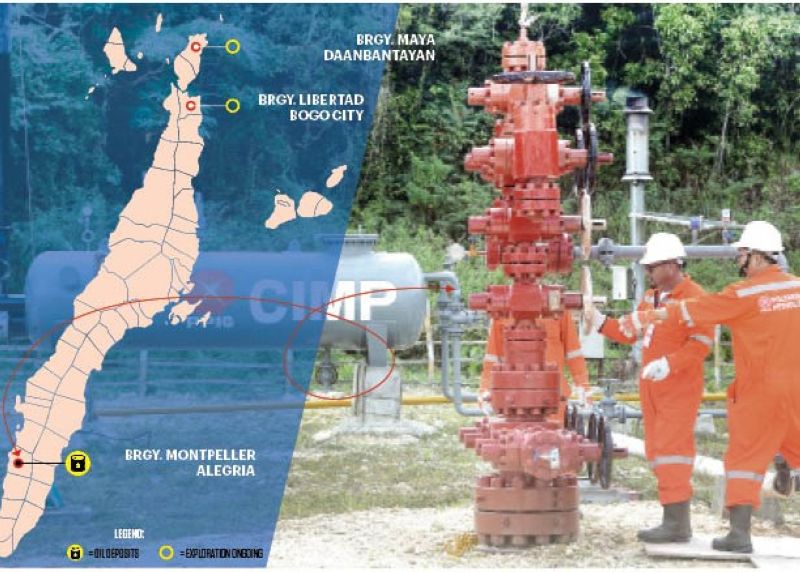 GUSHING WITH HOPE. Oilers check on the control valves in a well in Alegria, Cebu in May 2018. After success in finding crude oil and natural gas in Alegria town, the Department of Energy says oil exploration is now being conducted in two other areas in Cebu. (SunStar file)

AFTER the successful oil exploration off the shores of Alegria in southwestern Cebu, the Department of Enegy (DOE) has announced that it is currently looking for oil in the northern part of the province.

Tamang said Bogo City is not new to oil exploration. Natural gas was extracted in the city before this was used up after seven years.

The DOE is hopeful it can extract oil in northern Cebu after crude oil and natural gas were found in Alegria.

The gas field is 100 percent operated by FEI, a company owned by Forum Energy Corp. of Canada and local firm Forum Pacific Inc. FEI was awarded SC 40 by the DOE in 1995. Under the contract, FEI is responsible for the execution of the operations and will assume exploration risks.

SC 40 covers the northern half of Cebu Island plus part of the Tañon Strait to the west and of the Visayan Sea to the north. Libertad Gas Field is located southeast of Bogo City proper.

SC 40 Contractors are undertaking a 25-year production program that started in November 2005 following the Joint Determination of Commerciality (JDC) of the onshore Libertad Gas Field by FEI and the DOE. FEI initially intended to produce the gas for power generation. However, in 2006, the DOE mandated FEI to seek partners to develop the field with FEI only as a supplier of natural gas.

On Jan. 30, 2009, FEI and Desco Inc. signed a Gas Sales and Purchase Agreement (GSPA) for the development of the Libertad Gas Field for power generation.

In Alegria, China International Mining Petroleum Limited (CIMP) has eight oil wells in Barangay Montpeller, but is only using three.

Most of the crude oil’s buyers are from Luzon, said DOE Visayas officer-in-charge Jose Rey Maleza.

The crude oil still needs refinement before it can be sold to the public as usable products, such as gasoline, diesel and various forms of petrochemicals.

Maleza said the local government units will benefit from the sales of crude oil as they will get a percentage of the operators’ total sales.

Officials of the DOE and CIMP in March 2018 signed a JDC.

The DOE, in a statement, said that some 27.93 million barrels of oil and about 9.42 billion cubic feet of natural gas reserves were found in Alegria, after drilling and exploration activities that began in 2009. CIMP’s development plan for Alegria gained the DOE’s approval last Dec. 19, 2017.

Meanwhile, President Rodrigo Duterte has signed Executive Order (EO) 80, authorizing third-party suppliers in petroleum service contracts in a bid to position the country as an “oil and gas investment destination.”

“It is the aim of the government to achieve energy independence for the Filipino people by, among others, enhancing the country’s competitiveness as an oil and gas investment destination through the adoption of industry practices,” EO reads.

The order provides that entering into farm-in or farm-out deals will allow third parties to participate in the service contracts awarded by the government to PNOC EC, and vice versa.

The Palace released a copy of the EO on Thursday, May 30.(From HBL of SuperBalita Cebu, KAL, SunStar Philippines)