Duterte kisses other women in front of partner Honeylet Avanceña 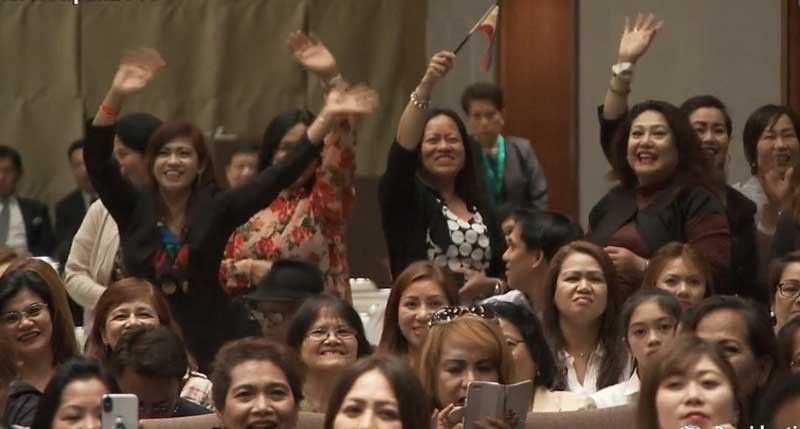 TOKYO. Some Filipino women in Tokyo, Japan wave their hands when President Rodrigo Duterte mentioned that he wanted to kiss some women as long as they are willing and not married. Duterte met with the Filipino community in Japan on Thursday, May 30, 2019. (Photo from Palace video)

THE presence of his long-time partner, Honeylet Avanceña, did not stop President Rodrigo Duterte from planting kisses on the cheeks of women in a meeting with the Filipino community in Tokyo, Japan on Thursday, May 30, 2019.

Duterte capped his more than two-hour speech before the Filipino community by inviting five ladies to go up the stage so he could kiss them on the cheek, to the seeming amusement of Avanceña.

"Sige na, para makauwi na tayo, anyone of you, kiss lang (Anyone of you, just kiss me so we can leave this place soon after the kiss)," the President told some women in the audience.

Prior to his latest act, Duterte, a self-confessed womanizer, said he really loves Avanceña.

He also referred to Avanceña as his "one and only" and "First Lady" of the Philippines.

Duterte drew flak during his visit to South Korea in June 2018, when he kissed a married Filipino woman on the lips.

In his latest speech, he insisted that there was "no malice" in his controversial kiss.