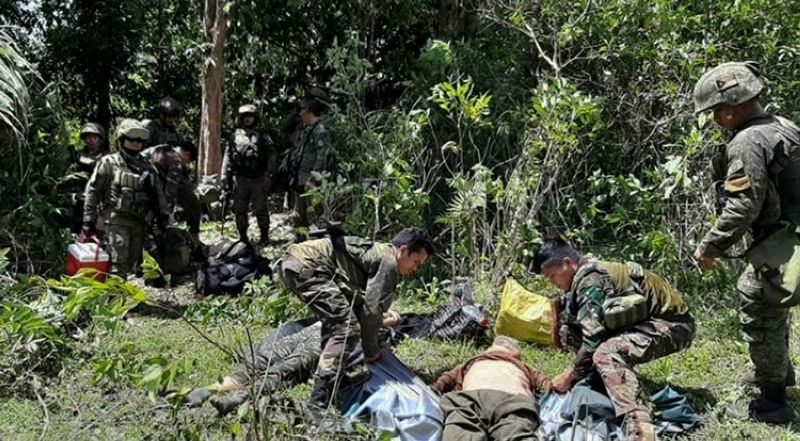 SULU. In this photo released by the Joint Task Force Sulu, soldiers prepare to evacuate wounded and dead bodies as pursuit operations continue in Patikul, Sulu, Friday, May 31, 2019. (AP)

ZAMBOANGA CITY -- Seven people, including a captive Dutch birdwatcher kidnapped more than seven years ago, were killed, while 20 others were wounded a firefight in the province of Sulu, a military official said Friday, May 31.

Besana said Dutch birdwatcher Ewold Horn “is believed to have been shot by his guards when he tried to escape from his captors during the firefight.”

He said the firefight broke out when the troops chanced upon 30 Abu Sayyaf bandits led by Radullan Sahiron while they were on blocking position in Sitio Bud Sub-Sub.

Besana said the troops have established a blocking position since another group of soldiers are pursuing the Abu Sayyaf bandits on the other side of the village.

The Westmincom official said the firefight lasted for about one hour and 30 minutes that resulted in the death of seven people -- Horn and six Abu Sayyaf bandits, including the second wife of Sahiron.

He said 20 others, including eight soldiers and 12 Abu Sayyaf bandits, were wounded. The wounded soldiers belong to the Army’s 32nd Infantry Battalion.

The number of casualties suffered by the Abu Sayyaf bandits was learned through reports from the residents in the area, he added.

Besana said the troops recovered the remains of Horn and that of Hiron’s wife, Mingayan, at the clash site during a clearing operation.

He said troops from the other units that included the 21st, 41st, 1st, and 5th Scout Ranger Battalions were ordered to block all possible escape routes of the remaining bandits who fled to different directions.

Horn is one of the remaining hostages the Abu Sayyaf bandits held captive in the province of Sulu.

Horn was kidnapped together with another birdwatcher, Lorenzo Vinciguerra of Switzerland, on February 1, 2012 in Sitio Luuk-Luuk, Barangay Parangan, Panglima Sugala, Tawi-Tawi. (SunStar Philippines)