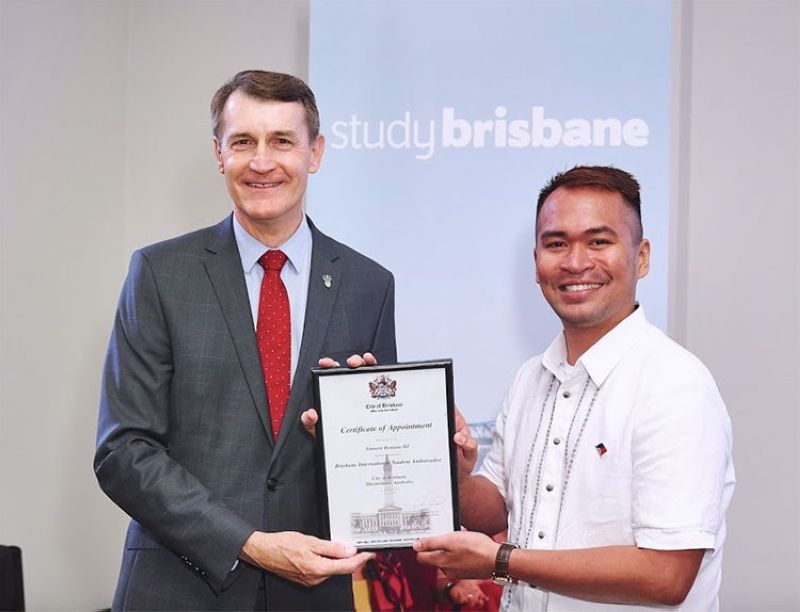 INTERNATIONAL students from 28 countries, including the Philippines, have been made official Brisbane ambassadors to showcase the city as one of the best places in the world to study, work and live.

Simeon Remata III from Dumaguete City, Negros Oriental is one of Brisbane’s International Student Ambassadors in 2019.

Remata, who is studying a Master of Social Work at Australian Catholic University (ACU), said studying and living in Brisbane has been an incredible experience.

“Studying in Brisbane has been a great experience because of its world-class universities, cultural diversity, friendly locals, and great beaches. Not to mention, amazing weather. It just reminds me of home,” he said.

“Being a Brisbane international student ambassador will allow me to expand my network so I can become a better social welfare practitioner for the communities I’ll be assigned in...If students in the Philippines were thinking of studying in Brisbane, I would tell them that you'll be surprised at how beautiful life is when you come and study in Brisbane,” he added.

Remata has completed a Bachelor in Community Development from the University of the Philippines Diliman and has devoted himself to working with the disadvantaged and marginalized sectors in the Philippines.

He is currently in his final year of Master of Social Work at Australian Catholic University, and he plans to continue his social welfare practice, working with refugees and asylum seekers in their settlement and integration in Australia.

Brisbane Lord Mayor Adrian Schrinner said Remata was appointed as a Brisbane International Student ambassador for the next 12 months in a special ceremony in April.

“Being a Brisbane international student ambassador will provide Simeon a unique experience in our city because of all the opportunities which come with being involved in the program,” Schrinner said.

"The students will be involved with a wide range of activities and experiences across the city, including events such as the World Science Festival and Brisbane’s Student Welcome Ceremony, as well as taking part in native wildlife encounters and island escapes to tell our story about the city’s unique lifestyle," he added.

Schrinner said Brisbane had 95,000 international student enrolments in 2018, and Remata will look to showcase the world-class education institutions and accommodation options on offer to the city’s prospective students from Philippines and give them an insight into day-to-day life in Brisbane.

"Brisbane is increasingly positioning itself as an international study destination of choice in Philippines, where students receive a superior education alongside an enviable outdoor lifestyle. Brisbane now welcomes students from over 160 countries, who enjoy our internationally recognized universities, educational institutions and thriving innovation and research hubs," he said.

“Brisbane’s international students enhance the city’s culture by adding to the diversity of our city and creating cultural appreciation between all our students and the wider community,” Schrinner added. (PR)