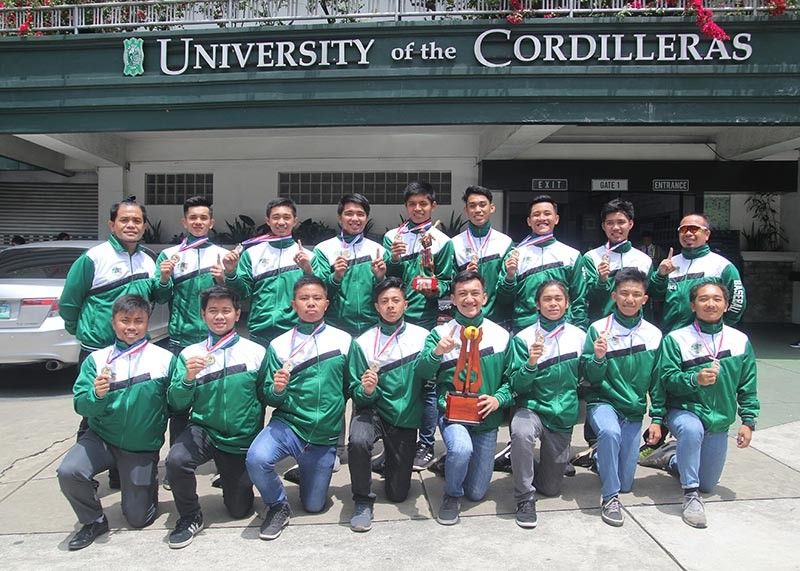 TOP OF THE MOUND. Members of the UC Jaguars men’s baseball team flash their medals after winning gold in the recently concluded PRISAA 2019 National Games in Davao City. (Photo by Roderick Osis)

ANOTHER national title in the diamond.

The University of the Cordilleras (UC) made another history after scoring a gold in baseball in the Prisaa 2019 National Games held in Davao recently.

The roaring Jaguars claimed their first national title in baseball, six years after the school earned a title in softball, also in the Prisaa.

“Since ito yung first time ko mag coach ng Prisaa, we dedicated this tournament para sa aming tatlong graduating players. We just want to prove na we are not only the best in the Cordillera but also in the Philippines,” said coach Raphael Peña.

UC Jaguars made it to the finals after edging Region 1o in their semi-finals match then closed out the tournament with a 2 - 1 victory against Region 5 for the gold.

Third baseman Clyde Alindeg scored the first point for the Jaguars on an RBI from Center fielder Ivan Reynaud Lipang.

Right fielder Angelo Christian Daniel Ngohayon, a senior high grade 12, then scored the winning single homer to clinch the gold for the Cordillerans.

“During the tournament, bukod sa weather, nahirapan din kame sa first game namin against Region 7 but we focused on every game,” Lapeña added.

Lapena said the team’s focus was evident in the entire tournament as they never realized they were already playing for the gold medal.

In 2013, UC Jaguars made history after conquering the softball competition edging Western Visayas’ Central Philippine University in a thrilling 4-3 victory in Lingayen, Pangasinan.