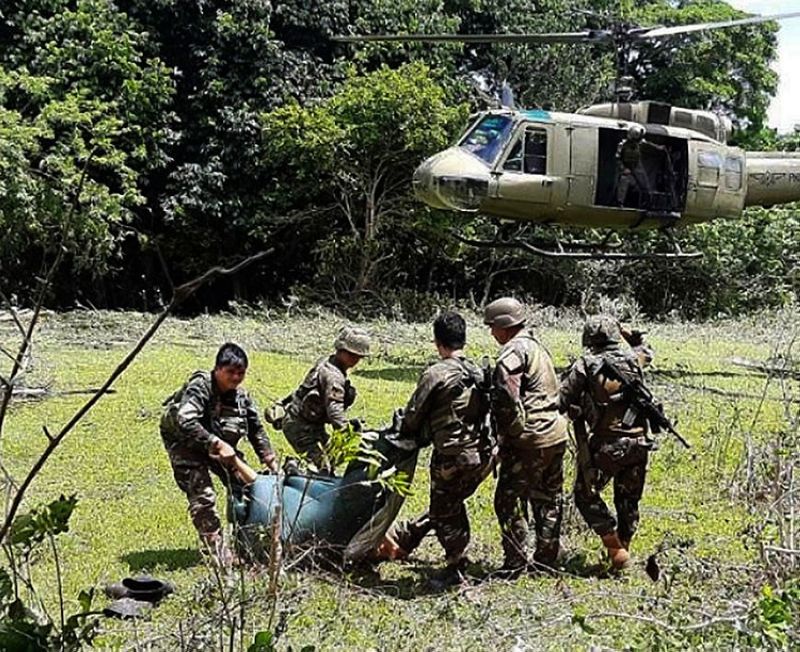 SULU. In this photo released by the Joint Task Force Sulu, soldiers carry bodies toward a military helicopter as pursuit operations continue in Patikul, Sulu, Friday, May 31, 2019. (AP)

MALACAÑANG denounced Friday, May 31, "in strongest terms" the Abu Sayyaf's killing of its Dutch hostage for seven years.

Ewold Horn, 59, was shot by his guards from the Abu Sayyaf terrorist group when he reportedly attempted to escape during a rescue attempt by the military.

"We condemn, in the strongest terms, the death of Mr. Ewold Horn, a Dutch national kidnapped and had been held hostage by the Abu Sayyaf Group since 2012," Presidential Spokesperson Salvador Panelo said in a statement.

"Mr. Horn was killed during an encounter between government troops and the local terrorist group, and his death was confirmed by the Western Mindanao Command," he added.

Horn, a photographer and birdwatcher, was kidnapped along with Swiss national Lorenzo Vinciguerra while they were bird watching on the remote southern island of Tawi-Tawi on February 1, 2012.

Vinciguerra managed to escape during an Army rescue in 2014.

Panelo vowed to bring Horn's killers to justice, as he extended Palace's sympathies and condolences to the Dutch national's family.

"We express our deep condolences to Mr. Horn's family and loved ones," the Palace official said.

"We vow to pursue his killers to the ends of the earth until they are brought to justice," he added. (SunStar Philippines)