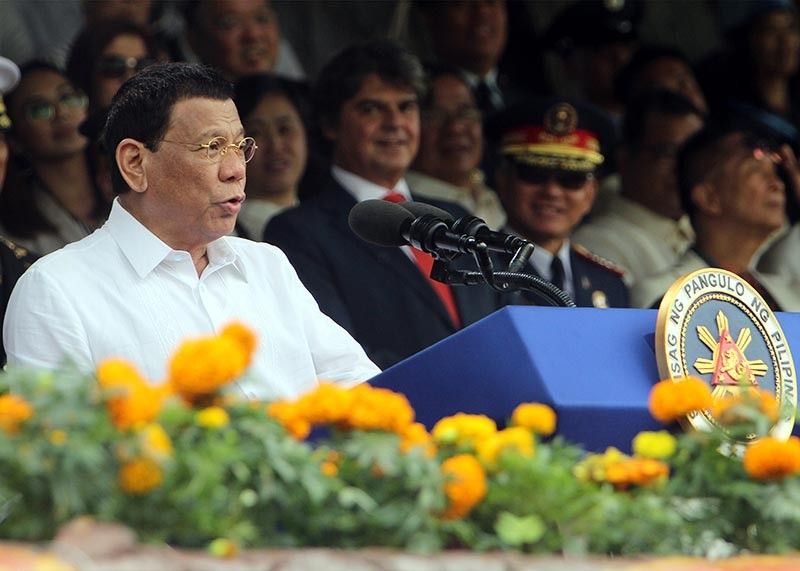 BAGUIO. President Rodrigo Duterte addresses the Philippine Military Class Class of 2019 during their graduation rites on May 26, 2019. Duterte earned the ire of human rights groups in the Cordillera for his latest rape joke during his speech. (Jean Nicole Cortes)

Innabuyog Alliance of Indigenous Women's Organizations in the Cordillera and the Cordillera Human Rights Alliance (CHRA) condemned the latest rape joke of the President made at the graduation rites of the Philippine Military Academy (PMA).

Virginia Dammay and Myra dela Cruz of the Innabuyog and CHRA called on mothers, sisters and daughters in the Cordillera to condemn this deplorable act by Duterte.

"We must resist the macho-fascist attacks of this regime against women. Let us continue to assert our rights and defend our honor and dignity," they said in a statement.

Innabuyog and the CHRA added that Duterte's statement came at a time when cases of violence against women and children (VAWC), including rape, is rampant in the Cordillera.

The Women and Children Protection Desk of the Police Regional Office Cordillera recorded 76 cases of VAWC in just the first two months of 2019. Majority of the cases were committed in Baguio City. Attempted rape and acts of lasciviousness lead the recorded cases under the Anti-VAWC Law. Rape is also the leading violation committed against children.

Both organizations said Duterte's jokes made a mockery out of State obligations to protect and promote human rights, and how this government pushes the laws and ordinances passed to protect women from different forms of abuse and violence to ineptness.

"These statements being said by the highest leader of this land embolden state agents, including PMA cadets, who will soon be occupying leadership positions in the military and police force to commit human rights violations such as rape and other forms of VAWC and human rights violations. According to a report of the PNP internal affairs, there were 43 cases of policemen charged with rape since 2015," the statement added.

During the PMA graduation, Duterte joked as he was signing pardon for cadets, pretending the offenses included rape and multiple rape.

The joke drew laughs from the crowd.