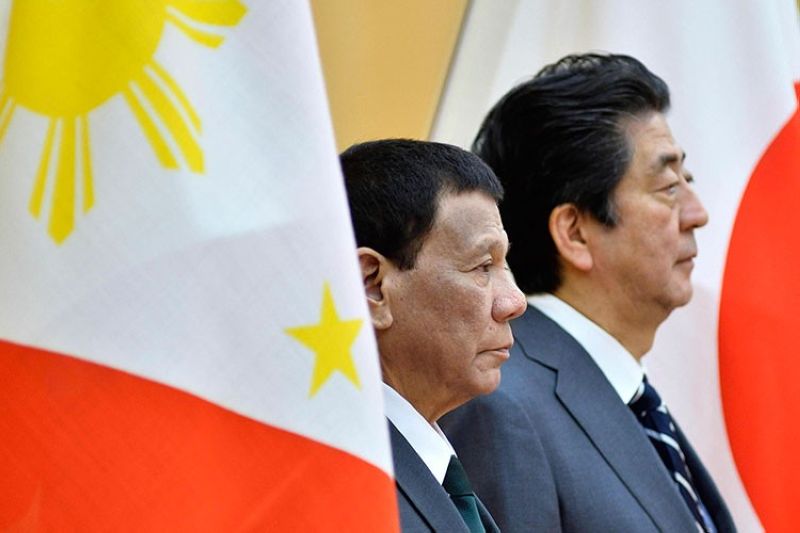 JAPANESE Prime Minister Shinzo Abe has pledged to grant the Philippines around 25 billion yen for the development of conflict-torn Mindanao during President Rodrigo Duterte's third visit to Japan.

The commitment was made when Duterte and Abe held a bilateral meeting in Japan on Friday, May 31.

"I am grateful for Japan’s fresh commitment of around 25 billion yen for the development of Mindanao’s road network, vocational training facilities and equipment, and other projects," Duterte said in a joint statement with Abe.

"I thanked Prime Minister Abe for the importance his government attaches to the Mindanao and its commitment to achieve just and lasting peace and a sustainable development for the people of Mindanao," he added.

In February this year, Japan pledged additional 3.2 billion grant for peace and development projects in Mindanao, following the ratification of the new Bangsamoro Autonomous Region in Muslim Mindanao.

The February grant is on top of Tokyo's $202-million loan grant to the Philippines for the Road Network Development Project in conflict-hit areas in Mindanao.

Abe assured Duterte that Japan woudl continue its "strong" support for projects actively being promoted by Duterte, such as the peace process and infrastructure development in Mindanao.

"Japan will strengthen our support attuned to the progress of the peace process so that the people of Mindanao can truly feel and enjoy the peace dividend at the earliest possible time," the Japanese Prime Minister said.

Duterte said his latest meeting with Abe was an opportunity "to ensure that Philippines-Japan ties will continue to grow from strength to greater strength."

"Since my last visit in 2017, there has been a marked increase in Philippines-Japanese engagements across the full spectrum of our relations. This is unprecedented. And it must be sustained," the President said.

Duterte expressed satisfaction that he and Abe committed to the "same" strategic partnership.

He noted that he discussed with Abe the ways for "greater" cooperation in upgrading the Philippines’ defense capabilities in maritime security and maritime domain awareness, among others.

He was also pleased with Japanese firms' "growing interest and confidence in the Philippines as a preferred trade and investment destination."

"We explored opportunities to tap our demographic complementarity to drive growth in our economies, including the possibility of Japan opening its doors to foreign skilled workers," he said.

"Japan’s comprehensive development assistance is nothing short of exemplary in quality and concessionality. It is the gold standard for the Philippines’ development cooperation with partner countries," Duterte added.

Abe said he was looking forward to work hand-in-hand with Duterte "to further deepen the bond of friendship between Japan and the Philippines and to contribute to regional and global peace and prosperity."

Duterte said he and Abe also had the chance to talk about challenges to regional maritime security, non-traditional threats, ongoing efforts to secure peace in the Korean Peninsula, supporting free trade, and advancing the rule of law.

"With the world undergoing profound transformations brought by power shifts, rapid globalization, and technological advancement, we need to find a new equilibrium. Our region must be able to maintain its gains so that we can achieve the promise of an Asian century," Duterte said.

"Today, Prime Minister Abe and I have rededicated ourselves to the common vision of a stable, free, and prosperous Asian region. Nothing can less be expected when friends closer than brothers meet," he added. (SunStar Philippines)