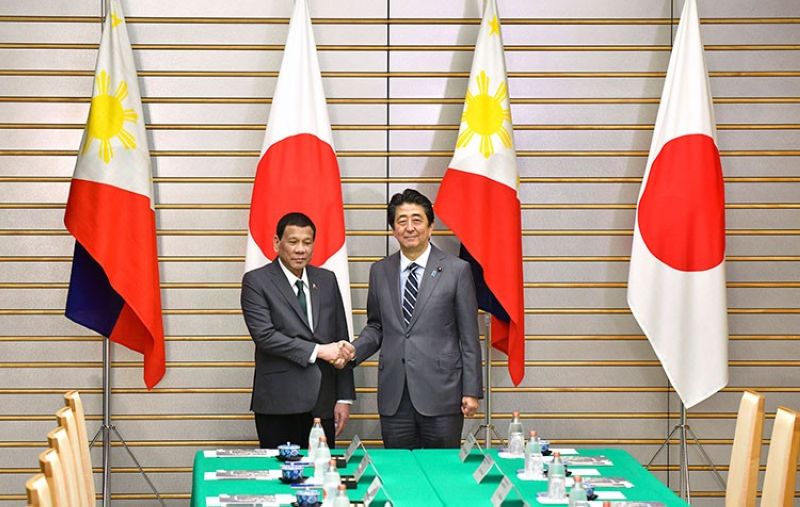 JAPAN. Philippine President Rodrigo Duterte (left) poses with Japanese Prime Minister Shinzo Abe for a photo prior to their meeting at Abe's official residence in Tokyo Friday, May 31, 2019. (AP)

TOKYO -- Philippine President Rodrigo Duterte expressed deep concerns Friday, May 31, about the escalating US-China trade war and its impact on the global economy, including that of his country.

Duterte, who is visiting Japan for talks with Prime Minister Shinzo Abe, said a protracted dispute would shrink world trade and investment.

He told reporters that the trade war is creating uncertainty and tension, adding, "There must be a resolution soon."

Duterte also urged more foreign investment in the Philippines, claiming he has eradicated corruption and that investments are safe. "In my term, (our money) is safe. ... There is no corruption. I have killed all of them already," he said jokingly.

The brash populist leader has campaigned against illegal drugs and corruption, while being accused of massive human rights violations because of the deaths of thousands of mostly poor suspects in his anti-drug war. Duterte, midway through the single six-year term Philippine presidents are allowed, solidified his grip on power this month with midterm election victories by his allies.

At a joint news conference with Abe, Duterte said he was "pleased with the growing interest and confident the Philippines is a preferred trade and investment destination for Japanese businesses."