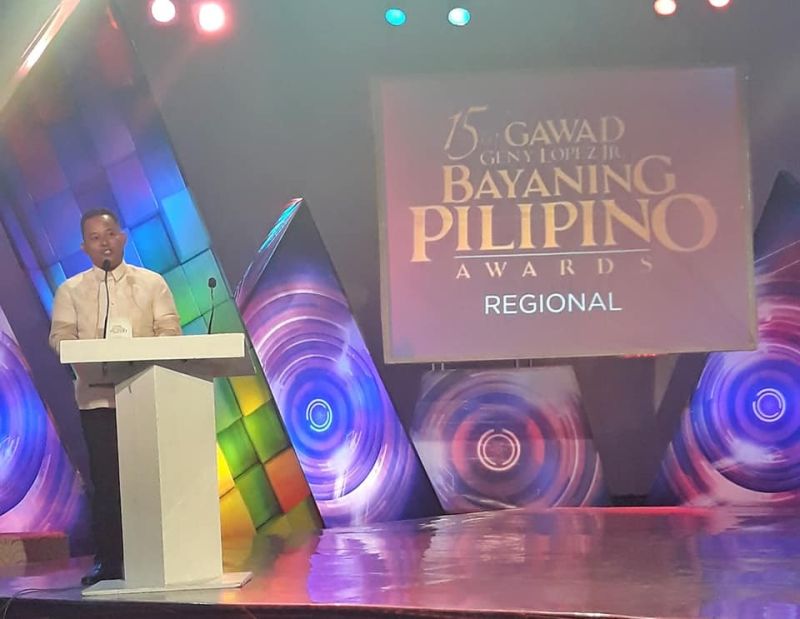 A TEACHER who started a garden project at a public school in Barangay Cabarasan Daku in Palo, Leyte after Super Typhoon Yolanda leveled the town in November 2013 was selected as the Visayas recipient of the Bayaning Gurong Pilipino award.

“My advocacy program is called Project LIFE or ‘Lifelong Interventions Through a Finest Environment,’ an innovation in which I enhanced the implementation of the ‘Gulayan sa Paaralan’ program to sustainable organic vegetable production in school for malnutrition alleviation,” said Gary Mosquito, 34.

“The harvest goes to a feeding program to alleviate malnutrition in school and improve academic and non-academic performance of children,” he said while thanking his fellow teachers for implementing the project.

“While the excess harvest is sold in the community and the income goes to some special programs and projects,” added Mosquito.

Mosquito was selected as Visayas winner of the prestigious 2019 Bayaning Gurong Pilipino.

He received his plaque as Visayas awardee during the 15th ABS-CBN Gawad Geny Lopez Jr. Bayaning Pilipino Awards at the ABS-CBN Station in Mandaue, Cebu City on June 1, 2019.

He was awarded “for setting aside personal interest, pursuing excellence in all endeavors, and dedicating his life in the service of fellow Filipinos.”

Accompanying him during the awarding ceremony was Dr. Melfe Sanchez, principal-in-charge/district supervisor of Palo II District in Leyte Division.

Mosquito, who has been teaching for 13 years already, recalled that the difficulties in finding a sustainable source of food and livelihood after Yolanda inspired him to launch the “Project LIFE.”

“The income goes to some school programs and projects like reproduction of test materials, Christmas party of the pupils and school beautification,” said Mosquito.

The project would free the students from the burden of finding money for their school projects and other expenses, he added. Majority of their students are children of ordinary farmers.

Seeing the success from the school-based vegetable garden project, Mosquito extended his advocacy to the community as their livelihood program, calling it "Gulayan ha Kabablayan Program."

“I believe that solution to malnutrition should start at home,” Mosquito told Sunstar Philippines.

“According to Mother Teresa, everyone can rise above their circumstances and achieve success if they are dedicated and passionate about what they do. The plaque that you received is an evidence of how great you are and portrays the best version of yourself as a public servant,” Sanchez said as she lauded the “selfless efforts” of Mosquito.

“You really made a difference in the lives of our fellow Filipinos,” she added.

Meanwhile, Mosquito thanked Sanchez, his seven other fellow teachers at school, Leyte division officials, and local leaders “for always being supportive in all my endeavors as a teacher.”

Since its inception in 1994, the “Bayaning Pilipino Awards” has recognized the extraordinary deeds of Filipinos with the support of Fr. Nilo Tanalega, SJ, founding director of Ugnayan at Tulong para sa Maralitang Pamilya (UGAT) Foundation Inc.