Duterte to soldiers: I'm willing to die with you 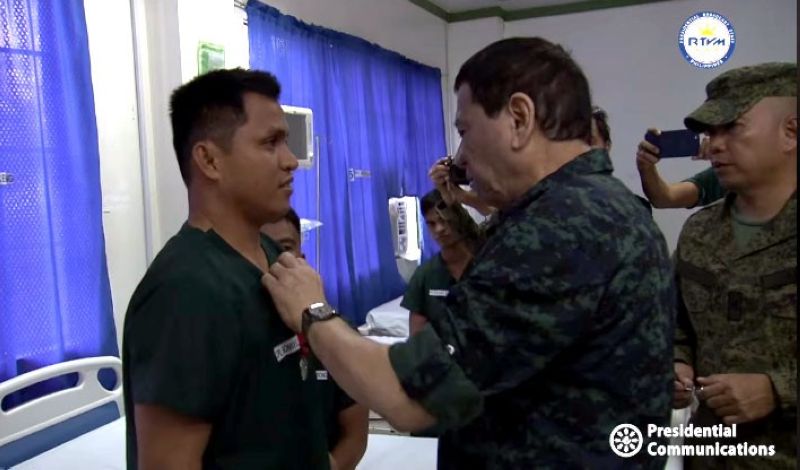 SULU. President Rodrigo Duterte visits the soldiers who were wounded-in-action (WIA) in a recent encounter against the Abu Sayyaf Group (ASG) at the Camp Teodulfo Bautista Station Hospital in Jolo, Sulu on June 4, 2019. He confers the Order of Lapu-Lapu with the Rank of Kampilan to 11 injured soldiers. Two with major injuries were airlifted to Zamboanga City. (Photo from RTVM video)

PRESIDENT Rodrigo Duterte assured wounded soldiers in Jolo, Sulu that he is willing to "die" with them.

He conferred the Order of Lapu-Lapu with the Rank of Kampilan to the 11 injured soldiers in the camp. Two with major injuries were airlifted to Zamboanga City.

The wounded soldiers were among the government forces who clashed with the Abu Sayyaf Group in Pansul village in Patikul, Sulu on May 31.

The Kampilan medal is conferred on individuals who were "seriously wounded or injured, or suffered great loss of property" as a direct result of their participation in Duterte's campaign or advocacy.

He renewed his vow that the government will continue supporting the military because of their bravery to defend the country.

Duterte, who doubled the salary of the soldiers effective January 2019, also pledged to provide hazard pay amid threats from extremist groups.

The President lamented that while Islam is a "great religion," it has been corrupted by the Islamist extremists.

Duterte then reiterated his call to the Moro people to make peace with the government, stressing his administration's readiness to extend assistance to them.

He said he would ask the National Housing Authority to build shelter for the Moros, especially the Tausugs. (SunStar Philippines)