Cyprus police find third suitcase with body inside in lake 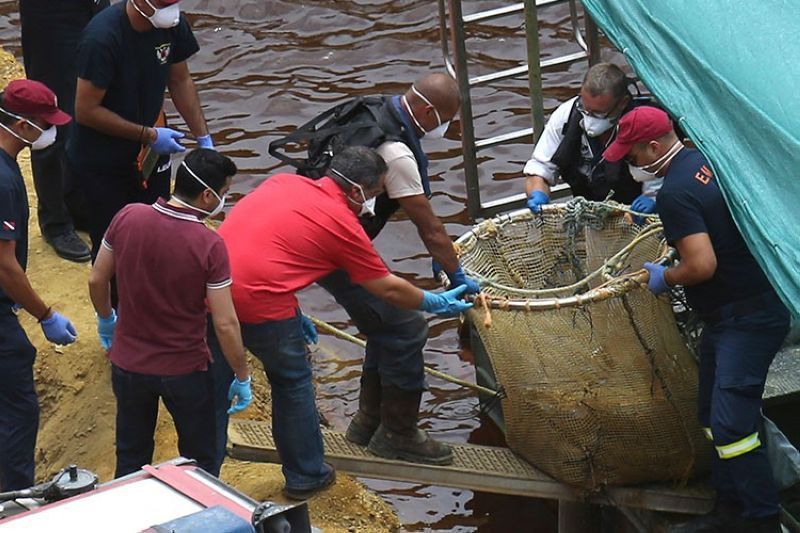 CYPRUS. Cyprus Special Disaster Response Unit and investigators transport a suitcase from a boat after it was retrieved from a man-made lake near the village of Mitsero, outside of the capital Nicosia, Cyprus, Tuesday, June 4, 2019. (AP)

Andreas Angelides said the discovery is a "major development" in the unfolding investigation of a Cypriot army captain who has confessed to the killing of seven foreign women and girls.

Angelides said coroners examined the latest discovery at the scene while more specialized tests will be carried out to determine the person's identity.

"We proceeded with our search keeping two key factors in mind, the degree of difficulty and the level of danger involved," said Angelides.

This is the third suitcase containing a body retrieved from the lake following a six-week search.

The 35-year-old suspect had told investigators that he disposed of the bodies of a Filipino woman and a Romanian mother and daughter in the lake after placing their bodies in suitcases.

The body in the latest find is believed to belong to Maricar Valtez Arquiola, 31, from the Philippines.

The case came to light on April 14 when the bound body of 38-year-old Mary Rose Tiburcio, also from the Philippines, was discovered by chance down a flooded shaft near the toxic lake that was part of what is now a disused copper mine.

The ensuing homicide investigation led to the captain's arrest following an assessment of his online communication with the victim. A second woman's body -- thought to be that of 28-year-old Arian Palanas Lozano, also from the Philippines -- was found in the mineshaft a few days later.

Investigators said the suspect, who hasn't been named yet, confessed to the killings in a 10-page, handwritten note. He led them to where he disposed of the bodies, including a dry well in a military firing range where the remains of who is thought to be Ashita Khadka Bista, from Nepal, were found.

The case put the spotlight on police failings in investigating missing persons' cases and led to the resignation of the justice minister and the firing of the police chief.

Officials said some later killings may have been prevented had "negligent" officers properly investigated the first missing person's reports.

Police continue to search for the body of Tiburcio's six year-old daughter in another lake where the suspect said he disposed of it. (AP)