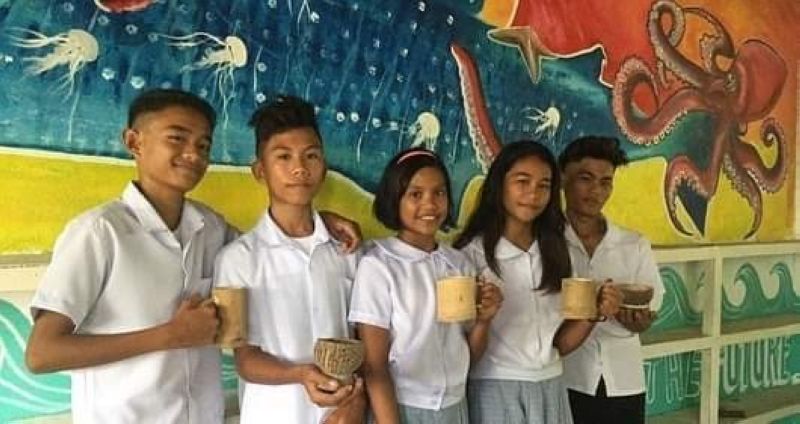 NEGROS. Students of Bulata National High School in Cauayan town use mugs made of indigenous materials like bamboo and coconut shells at the school's "Wala Usik" canteen. (Contributed photo)

A PUBLIC high school in Cauayan town has pioneered the establishment of "Wala Usik" canteen in Negros Island, an initiative positioned to promote plastic-free culture in the community.

The Bulata National High School (BNHS) in Barangay Bulata of the southern Negros Occidental locality unveiled the canteen on Monday, June 3, in time for the opening of classes and celebration of World Environment Day and World Oceans Day this week.

"Wala Usik" is a Hiligaynon phrase that means zero-waste or nothing is wasted.

The concept of the project is using only what is biodegradable, indigenous and reusable such as mugs made from bamboo, bowls from coconut shells and plates from banana leaves.

The school canteen, which will cater to at least 400 students and faculty, also aims to promote healthy eating from fresh and local produce.

It will avoid and discourage processed or manufactured food packaged in single-use plastic.

BNHS Principal Eiggy Duller Yap, who is leading the transition of their canteen, has gained inspiration to do the project after he attended the Danjugan Island's Marine and Wildlife Camp last summer.

Yap, who was assigned at the school just this year, recognized that the natural resources are under threat of plastic pollution.

He said, in a statement, that single-use plastic is often mismanaged and causes problems to the environment as well as public health among schools nationwide.

The school head was further inspired by the "Wala Usik" Sari-Sari Store, an initiative of the Philippine Reef and Rainforest Conservation Foundation Inc. (PRRCFI) through its Sweep: Sea Waste Education to Eradicate Plastic program.

"Why not adopt this model and reduce plastic waste at source at the same time promote what's local," Yap said, adding that "imagine if all school canteens in the Philippines become zero-waste."

Launched in the said barangay in April this year, there are already eight "Wala Usik" Sari-Sari Stores operating in Negros island.

All these stores are partners of PRRCFI, the non-government organization behind the Danjugan Island, and funded through USAid Municipal Waste Recycling Program.

The effort is also seen to curb plastic wastes that harm food source and life support when they reach the ocean.

Moreover, the "Wala Usik" canteen of BNHS also features walls painted with colorful marine life with the theme "More Fish, Not Plastic" by volunteers from the Association of Negros Artists (ANA).

The wall pays homage to the rich biodiversity of Cauayan waters and the Danjugan Island Marine Reserve and Sanctuaries.

The principal is seeking additional support from stakeholders to make the school canteen fully operational. They need more chairs, tables and other equipment.

The canteen will be managed by the school's Teachers' League Association. It will also be used for school-based feeding program.

Dave Albao, executive director of PRRCFI, said they are so honored to be a long-time partner of BNHS since conservation work involves experiential learning and community engagement.

"If more communities become conscious of how their waste is managed, they will see that the priority is how to reduce waste at the first place, especially plastic that threatens all life," he added.