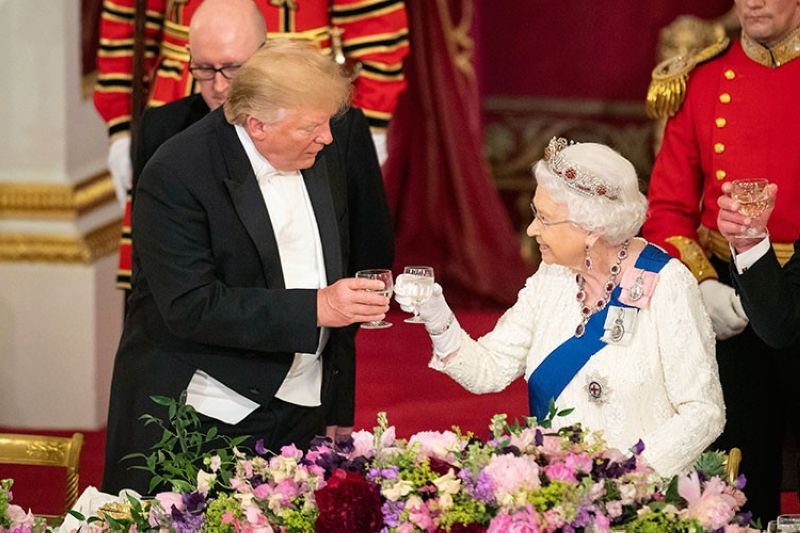 LONDON. US President Donald Trump (left) and Queen Elizabeth II make a toast during the State Banquet at Buckingham Palace, in London, Monday, June 3, 2019. Trump is on a three-day state visit to Britain. (AP)

But the free burial in the Makati cemetery? That must have prompted Trillanes to reject the entire offer. It turned out later that Senator Ping Lacson, who disclosed the story to media, added the free parking and free burial as a joke. Nice to know they still keep their humor amid the impending demise of Senate independence. Ha ha.

* US PRESIDENT TRUMP TOUCHING THE QUEEN'S BACK. Trump made a royal faux pas during the state banquet at Buckingham Palace when he appeared to "lightly touch" Queen Elizabeth II's back as she stood to give a toast. The protocol says the monarch "should not be touched unless she initiates contact." Trump also reportedly touched the queen's elbow as he finished his speech and thanked her.

Cebu City vice mayor-elect Mike Rama said he won't "dictate" mayor-elect Edgar Labella and he, Labella, not Mike, "will make the call" on executive decisions. Stripped of excess words, that was how the former mayor put it to the program host, Jason Monteclar, on dyCM radio Wednesday (June 5).

Former mayor Mike slid to the position of VM in the last election and won with standard bearer Labella but their Barug team of councilors won only seven seats out of 16 slots in the north and south districts of the city, thus losing the majority to rival BOPK, which grabbed nine seats, thus holding the 11-against-seven edge (with the additional two from "apolitical" SK and ABC reps who have supported Mayor Tomas Osmeña's party).

Even before the start of the Barug administration at City Hall, with a BOPK-ruled City Council though run by a Barug presiding officer, talks are rife about (a) a Labella-Rama rift and (b) disunity among the Barug councilor candidates, particularly the local griping from one who lost against one who won.

Sidelights on the issue, from the Mike Rama interview and other sources, which distracted some attention from Barug's planned programs:

* Mike said he is not denying about the exchange of harsh words between incoming councilor Niña Mabatid, who placed #2 in the north district, and Councilor Jun Alcover, who placed #13. That would be lying, he said, and he wouldn't lie. He is confident though of mending the rift.

* Mabatid must not have been invited to the Barug post-election party at the Rama compound in Basak. She prefaced her short talk before the crowd of supporters with, "Nagpabaga ko sa akong nawong. Mianhi lang gyud ko pagpasalamat ..."

* Mike made clear he is the president of Barug, indicating that he has a lot to say on party matters. Barug bets filed their COCs under PDP-Laban, meaning, among others, that the PDP-Laban president will sign the recommendation for the replacement of any Barug local elective official who cannot finish his term because of death, disqualification, or permanent disability.

* Mike's advice to jobseekers: "Go to the mayor. Edgar is the hiring authority." That shows respect for the mayor but also it's a way to divert expected heavy traffic of unemployed persons from the VM's office to the mayor's office.

* Rama's sloganeering is far from over. To end intramurals within Barug: "Together, we can make things happen." To promote progress in the city: "We can make Cebu great again."