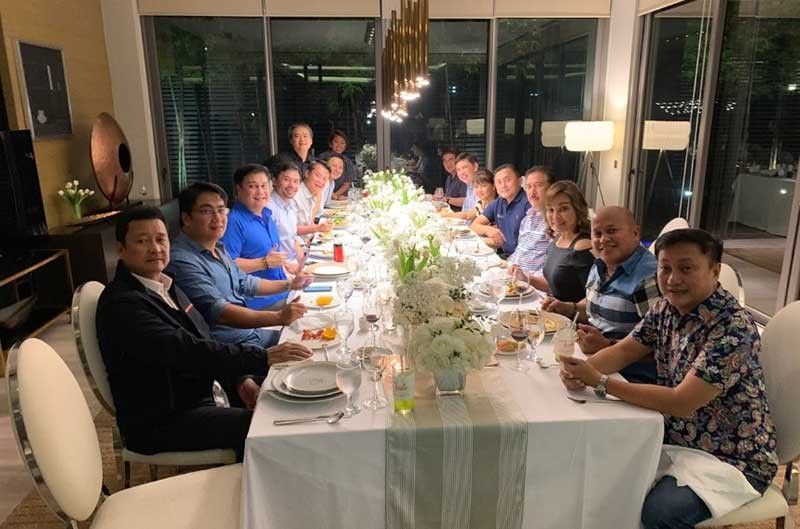 MANILA, Senators and senators-elect who form the new majority bloc meet over dinner at the residence of Senator Emmanuel Pacquiao on Wednesday, June 5, 2019. (Photo from Manny Pacquiao Twitter)

INCOMING senators who form part of the new majority bloc in the Senate have selected the committees that they prefer to chair during the 18th Congress.

Senate President Vicente Sotto III, in a phone-patch interview with reporters, said the chairmanships were 95-percent firmed up during their dinner meeting at the residence of Senator Emmanuel "Manny" Pacquiao Wednesday, June 5, 2019.

Senator Cynthia Villar, who received the highest number of votes in the recently concluded midterm elections, as well as senator-elect Pia Cayetano and the minority bloc were not present during the meeting.

Sotto said Villar, who is rumored to be vying for the Senate presidency, is out of the country and is scheduled to return on Saturday, June 8, yet.

Sotto said he distributed pieces of paper after the dinner and asked each senator-elect to write their name and their preferred committees, but stressed that the equity of the incumbent rule will prevail.

Senator-elect Christopher Lawrence "Bong" Go, who received the third highest number of votes in the last elections, has chosen the committees on health and urban planning/housing, which are both vacant.

Senator-elect Ronald dela Rosa, a former chief of the Philippine National Police, was offered the committee on public order.

Senator-elect Francis Tolentino will most likely be assigned to chair the committee on local government. Sotto said.

Senator-elect Imee Marcos is interested in the social welfare and agrarian reform committees.

Sotto said he still has to discuss the chairmanship of the social welfare committee with Minority Leader Franklin Drilon and Senator Leila de Lima.

For the agrarian committee, Sotto said he will have to talk with Villar because of the equity of the incumbent rule. It would be Villar who will decide if she would give up the agrarian reform committee and give this to Marcos, he added.

(I haven't talked to Senator Villar. I will try to find a way to talk to her soon. Imee knows that she couldn't be given the committee if the chairman refuses to give it up. I remember that she - Villar - told me on Tuesday or Wednesday not to touch the agriculture, environment and agrarian reform committees. "If anybody is interested, let me know," that's what she said.)

Cayetano, meanwhile, might be assigned to head the ways and means committee.

Cayetano had expressed preference for education but two incumbent senators are also interested in the committee.

Sotto said Senator Grace Poe is willing to give up the public information and mass media committee, but it will be a toss-up between Revilla and Marcos, who has also expressed interest.

Poe, meanwhile, will take over the committee on banks that will be vacated by outgoing senator Francis Escudero, who has been elected as governor of Sorsogon.

Senator-elect Manuel Lapid will likely get the committee on games and amusement.

Sotto said the chairmanships will be "finalized and formalized" after the discussions with Drilon and other minority bloc members.

Committees held by incumbent minority senators will remain with them since no one has expressed interest in them, except for the committee on women and family relations which Cayetano is eyeing. The committee is chaired by Senator Risa Hontiveros. (MVI/SunStar Philippines)