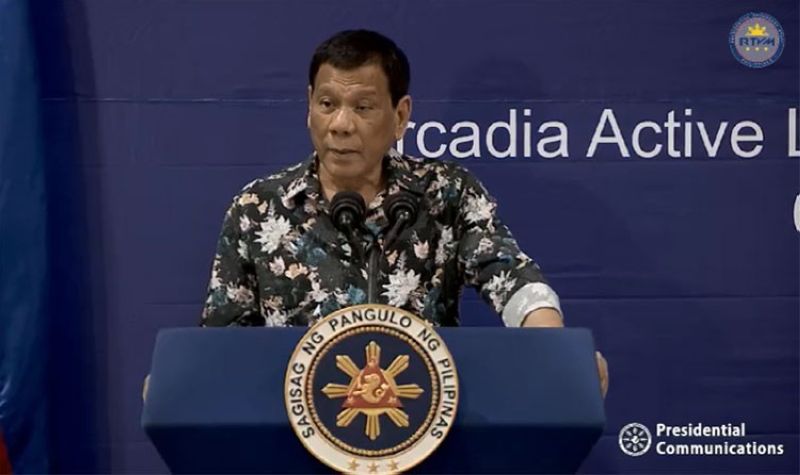 DAVAO. President Rodrigo Duterte delivers a speech during the dinner hosted at the Arcadia Active Lifestyle Center in Davao City on June 6, 2019. (Screenshot from RTVM video)

PRESIDENT Rodrigo Duterte asked the Commission on Audit (COA) Thursday, June 6, to allow the diversion of P5 million worth of Marawi rehabilitation funds for the 2018 annual Islamic pilgrimage or Hajj to Mecca.

Duterte's appeal came after the COA reported in its 2018 annual audit report that the Housing and Urban Coordinating Council (HUDDC) made an unauthorized fund transfer to cover the expenses of internally displaced persons (IDPs) of Marawi who went on a Hajj in Saudi Arabia last year.

The COA also demanded from the HUDCC the return of the diverted fund, explaining that it was supposed to be used for the recovery, reconstruction, and rehabilitation of war-torn Marawi and other affected localities.

The President, in a speech delivered before Muslim Filipinos in Davao City, urged COA to "reconsider" its decision.

"Alam mo, sa totoo lang, maybe part of my Muslim character says that 'yung pilgrimage sa Hajj mas importante iyan para sa mga Muslim kaysa sa isang mansyon. You can forget about the housing there that are being planned by the government," he said during the 2019 Eid'l Fitr celebration held in New Matina, Davao City.

(You know, frankly speaking, maybe part of my Muslim character says that the Hajj pilgrimage is more important for the Muslims that for them to own a mansion. You can forget about the construction of housing units there that are being planned by the government.)

"So I'm asking COA to reconsider. Ano ba naman iyang P5 million? Actually, that P5 million is worth billions in terms of your kind, I said, generosity to finance the poor people na Muslim para makapag-Hajj," he added.

(So I'm asking COA to reconsider. What is P5 million? Actually, P5 million is worth of billions in terms of your kind generosity to finance the poor people in the Muslim community to allow them to go on Hajj.)

The COA, in its annual audit report, said the transferred fund for the annual Islamic pilgrimage of IDPs of Marawi City violated the provisions of Presidential Decree 1445 or the Government Auditing Code of the Philippines and Section 6 or Trust Receipts of the General Provision of 2018 General Appropriations Act.

The state audit agency stressed that the unauthorized activity was "not in accordance with the purpose for which the Task Force Bangon Marawi (TFBM) Funds [were] intended for."

HUDCC chair Eduardo del Rosario, who also leads TFBM, said Wednesday, June 5, that transferring the fund for Hajj participation was "part of the social healing process in the overall rehabilitation of Marawi."

Also on Wednesday, June 5, Malacañang admitted that the HUDCC may face technical malversation, if it is proven that the agency diverted the funds.

But for Duterte, state auditors should instead consider the HUDCC's move as a "pacification campaign" for poor Muslim Filipinos.

The President also emphasized that such practice was not new, as he had also done it during his mayoral stint in Davao City.

He added that his daughter, Davao City Mayor Sara "Inday" Duterte-Carpio, is likewise giving financial aid to Muslims who want to attend the annual Islamic pilgrimage.

"I kept on sending [Muslims for Hajj], I started with 10, then 20. Since 1988, and Inday is still doing it. Na ngayon, kung ipa-reimburse mo siya, saan naman ako hahanap ng pera? Eh di magpakulong na lang ako (Ngayon, if you ask us to reimburse, where will we get the money? I'd rather go to jail)," Duterte said.

"It's not a financing of a religious journey. Do not take it in that sense. There is a separation of church and state. Take it as a pacification campaign for after all, natives man tayo dito (we are natives) and we were subjugated," he added.

Duterte stressed that the diverted fund was used to fulfill the "lifetime dream" of poor Muslim Filipinos to participate in Hajj in Mecca.

Should the COA reject his appeal, he said he would consider it as a "historical injustice committed against the Moro people."

(So now, I'll tell COA, do not file charges against Del Rosaio. Because if you want him to be jailed, I and Inday will suffer the same fate. If my daughter and I get jailed, we will initiate a revolt here in Mindanao.)

"Kayo ang bahala (That's your call). Then I will start again to gripe against the historical injustice committed against the Moro people," he added. (SunStar Philippines)