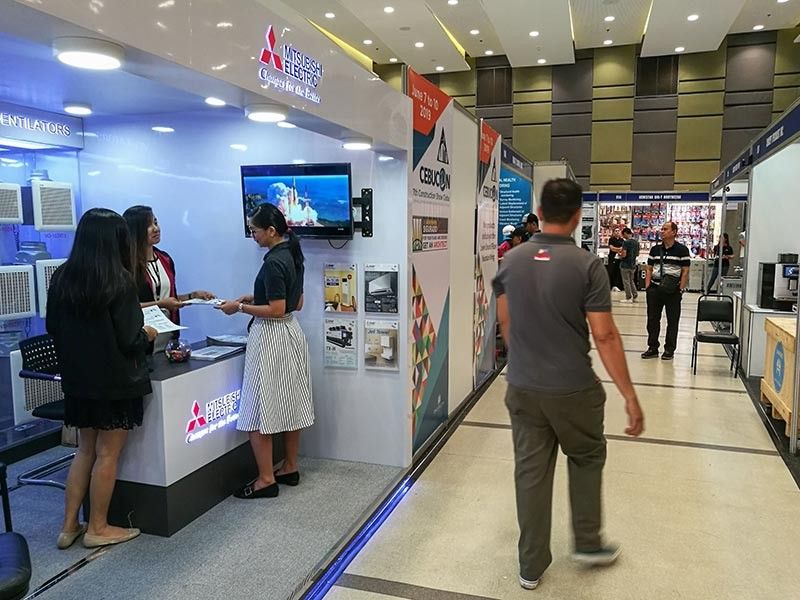 CEBU CONSTRUCTION SHOW. Sales for elevators are up, says International Elevator and Equipment Inc. president Ramoncito Ocampo, who has a booth at the Cebu Construction Show at the SM Seaside City. The top importers in Central Visayas are in construction-related businesses. (SunStar Photo/Arni Aclao)

PLAYERS expect robust growth in the construction sector this year as they see non-stop progress in real estate and infrastructure projects across the country.

“We don’t see any slowdown yet in the industry because real estate players, for one, keep on expanding. In fact, there’s a good future here in the south. They (companies) are all here,” said Ramoncito Ocampo, president of International Elevator and Equipment Inc. (IEEI).

Ocampo said Visayas and Mindanao make up 20 percent of IEEI’s business. He said accelerated developments in high-rise buildings for hotels, condominiums and offices boost the demand for elevators.

IEEI is one of the exhibitors of the 27th edition of the Cebu Construction Show, which runs from June 7 to 10, 2019.

“These property giants are not stopping. They continue to look for growth areas where they could erect their high-rise buildings,” he said.

Ocampo cited the government’s Build, Build, Build program as one of the major drivers that propel the growth of construction, on top of the investors’ confidence in the economy, which is one of the fastest growing in Asia.

Lilibeth Ducut-Abais of LA Ducut and Company Inc., the organizer of the Cebu Construction Show, added that the government’s massive infrastructure program is creating a multiplier effect in the community.

She said it has given all players in the sector the opportunity to advance their growth, as well as impart and raise the awareness on sustainable initiatives and technologies they have adopted in their products and services.

“It remains a busy year for the sector,” she said.

The busy construction activities in 2018 fueled the growth of Central Visayas to 7.6 percent from 5.2 percent in 2017.

The construction sector posted a significant improvement, both in terms of the number of construction projects and in terms of value, according to National Economic and Development Authority 7 Director Efren Carreon.

Among the provinces, Cebu had the most number of new construction projects in 2018, followed by Bohol, Negros Oriental and Siquijor.

“Several factors were behind the strong performance of the construction sub-sector in 2018. These include a strong local economy translated into a high demand for residential and commercial spaces, and the government’s Build, Build, Build program,” said Carreon.

Given this healthy growth in construction, Carreon said they expect a positive performance to continue in 2019 to be driven by the healthy demand for office, residential and retail spaces, along with the growth in tourism and information technology-business process management (IT-BPM) sub-sectors.

According to the Department of Trade and Industry (DTI), there were 158,664 construction projects around the country in 2018.

In March 2019, the government unveiled the Philippine Construction Industry Roadmap 2020-2030 that aims to shape the future capacity, values and institutional integrity of the country’s construction industry for the next 10 years.

With the theme “Tatag at Tapat 2030,” the roadmap aims to steer the industry toward the “Golden Age of Infrastructure.” It was prepared by the Reid Foundation and commissioned by the DTI-Construction Industry Authority of the Philippines and the Philippine Constructors’ Association.

The targeted total spending for the industry under the roadmap is a minimum of P40 trillion and a maximum of P130 trillion within the 10-year period.