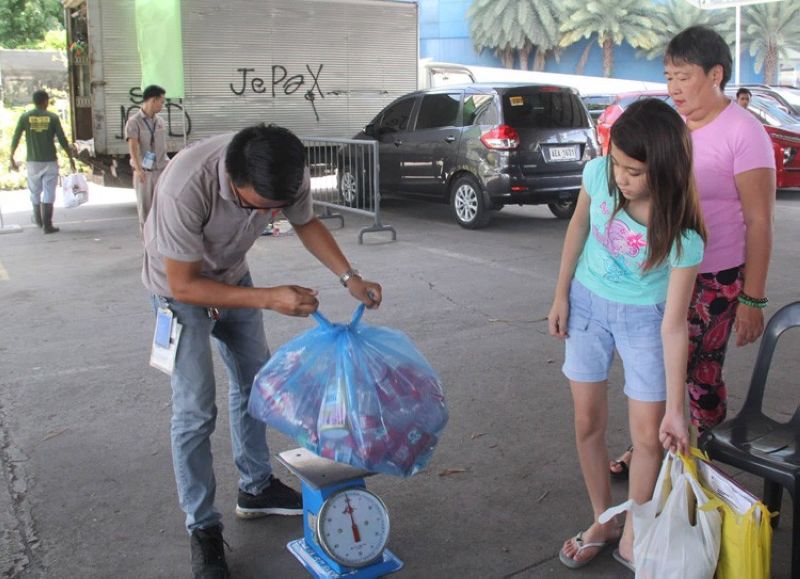 CEBU. In an effort to minimize residual wastes, SM City Cebu has started a "Trash to Cash" initiative that will allow their customers and other individuals to sell their recyclable waste to them in exchange for money. The mall holds the initiative every first Friday and Saturday of the month from 10 a.m. to 2 p.m. (SunStar Cebu/ Amper Campaña)

GETTING rid of one’s trash and earning money from it drove families to a mall’s Trash to Cash project, and found it a rewarding way to help address Cebu’s garbage problem.

Twelve-year-old Rita Villarin and her mother, Myra Flor, drove all the way from Talisay City to SM City Cebu to sell her unused notebooks and bottles on Friday, June 7, for the mall’s institutionalized program called “Trash To Cash.”

“This is the first time that I did this. I just saw a post on Facebook about this initiative. I just want to help the environment and at the same time to earn out of my trash,” she said.

The Department of Public Services (DPS) collects an average of 600 tons of garbage in Cebu City daily.

Rita’s mother, Myra Flor, said the trash to cash idea is something that the local government, starting from the barangay level, should adopt as it addresses one of the city’s main problem, which is improper garbage disposal.

“I would definitely recommend my friends to do the same. This is encouraging and it only proves that there is really money out of trash. In fact, I saw a report on television that in Siargao, one could exchange a piece of plastic for a banana,” she said.

For Claudine Balcos, 23, who sold discarded boxes for P90, said this project helped her earn money.

She was able to sell around 90 kilos of carton boxes which she and her co-worker gathered from an establishment they are working in.

“It took us a month to collect all those carton boxes. Even in small amount, at least we are earning out of the things which we thought are of no use already plus we help solve the problem on garbage wastes,” she said, in Cebuano.

Through the ‘Trash to Cash’ program, SM encourages households and offices to collect and sort their recyclable throw-aways and turn these into cash.

In SM City Cebu, the monthly recycling market is done every first Friday and Saturday of the month from 10 a.m. to 2 p.m. and is located at their covered parking lot across Bayfront Hotel.

While waste products that requires special handling like batteries and gadgets can be accepted on special arrangement.

Louie Delgado, Man-Tech Management Services Corporation representative, the project’s private garbage hauler, said that as of 1:45 pm of June 7, they were able to collect around 1,130 kilos of mixed trash.

“We buy carton boxes, tin cans, and used papers at P1 per kilo, while those used books at P0.50 centavos per kilo,” he said.

Delgado said after they pick-up or collect the trash from the ‘recycling market,’ they haul and segregate them in their Material Recovery Facility (MRF) in Barangay Umapad in Mandaue City.

“Some of the unique items we collect here are made up of metals such as damaged metal pots. What we do is if it can still be used, we donate them. If these are already damaged, we re-sell them to our metal buyers. As for the papers, after the segregation, some will undergo shredding and then it can now be used as one of the ingredients in cement making,” he explained.

This initiative started around 10 years ago already, he added. (WBS)