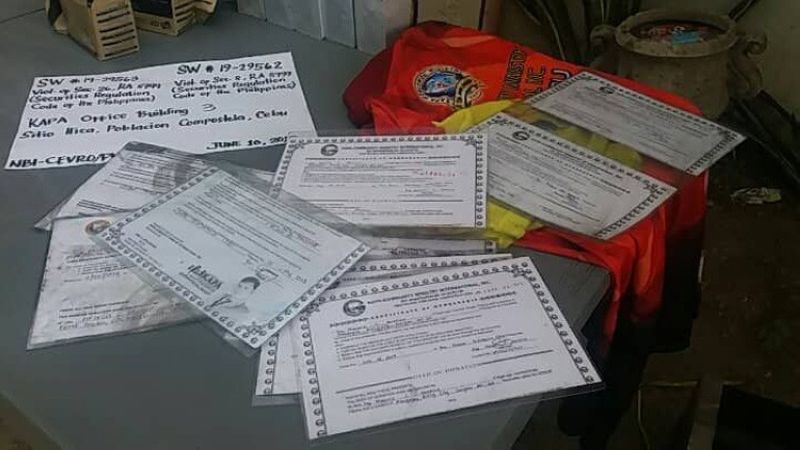 Operatives of the NBI 7 and the PRO 7's Regional Special Operations Group (RSOG) conducted the raid after a search warrant was issued by Manila Regional Trial Court (RTC) Branch 20 Judge Marivic Umali against KAPA for alleged violation of the Securities Regulation Code.

Panican said they failed to recover other items mentioned in the search warrant as most of them were destroyed during last Saturday's fire.

Based on the search warrant, Umali ordered the applicants to seize certificate of membership forms, computers, cellular phones, laptops, printers and other paraphernalia containing the transactions, records of investments and those used or intended to be used in connection with their investments schemes; ledgers, journals and all other books of accounts and documents used in recording the transactions in connection with their business operations; vehicles, motorcycles and such other personal properties donated and/or purchased during their business operations or used and/or intended to be used by the board of directors, officers and its agents; cash collected from KAPA's clients; and printing machines, laminating machines, among others.

On Saturday, June 8, President Rodrigo Duterte ordered the shutdown of KAPA and other investment scams.

In an interview with Kingdom of Jesus Christ founder Apollo Quiboloy, Duterte said the activities of KAPA and other investment scams should be stopped as "they are too good to be true."