Quiboloy clarifies he is not anti-poor 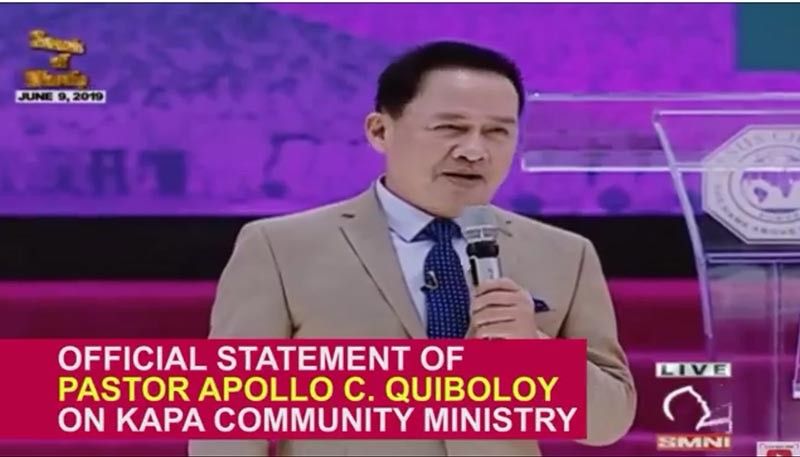 KINGDOM of Jesus Christ, The Name Above Every Name, Inc. founder and lead pastor Apollo Quiboloy lambasted the Kapa Community Ministry International Inc., a religious group allegedly involved in an investment scheme, for using the word of God as a front in their alleged illegal activities.

In a video posted on his Facebook page, Quiboloy clarified that he is not anti-poor and he is not against the people from getting rich through this kind of scheme but what he is against for is using the name of God as a front for investment schemes like what Pastor Joel Apolinario is allegedly doing.

Quiboloy received backlash from Kapa members when President Rodrigo Duterte guested in his Give Us This Day episode where the Kapa issue was brought up. In response, Duterte ordered authorities to shut it down because at the end of the day, it will collapse and will leave investors unpaid.

“Kamong mga miyembro sa Kapa, ayaw mo kasuko sa akoa. Ako nag-ampo ko nga malamdagan mo sa akong krusada (To the Kapa members, do not be mad at me. I pray that you will be enlightened with my crusade)," Quiboloy said.

He said he does not care about the operation of these investment schemes since it is the government who has jurisdiction of it. What he cried foul was the ways of Kapa and its founder by associating it with God.

“Mao nay akong isyu. Ayaw paggamit ug spiritual, pulong sa Diyos itakuban sa inyong binuang. Dili na nako na tugutan karon. That’s why nia ko gipadayag ko para bungkagon ang pangilad sa Satanas (I have an issue with how you are using the name of the Lord as a front for your scheme. I will not allow that. I am here to reveal the deceit of the devil),” Quiboloy said.

The Pastor further explained how the Ponzi-like scheme which will soon fail and will be another problem of the government.

“Kanang Kapa kapa ninyo dira ayaw ko idawit nga mga problema nga giatubang ninyo dili nako na problem sa gobyerno na nga problema. Ang ako lang ayaw gyud mog gamit sa pulong niya ug sa iyang pangalan para sa ipangtabon sa inyong pagpangilad. Dili ko musugot ana (Do not drag me into the problems you are facing with Kapa, that is the government's concern. Personally, I do not like how you are using His name to cover your acts of deceit. I will not allow that,” he further said.

The Securities and Exchange Commission (Sec) had issued an advisory on October 3, 2018, about Kapa founded by Pastor Joel Apolinario, as it enticed the people to invest with a promise of a 30 percent return of investment monthly. On February 14, they issued a cease and desist order (CDO) against the organization that registered itself as an Independent Religious Corporation.

The commission said Kapa is a registered corporation; however, it is not authorized to undertake business activities as it would require additional legal documents and secondary license such as broker or dealer in securities, investment house, and closed-end or open-end investment company.