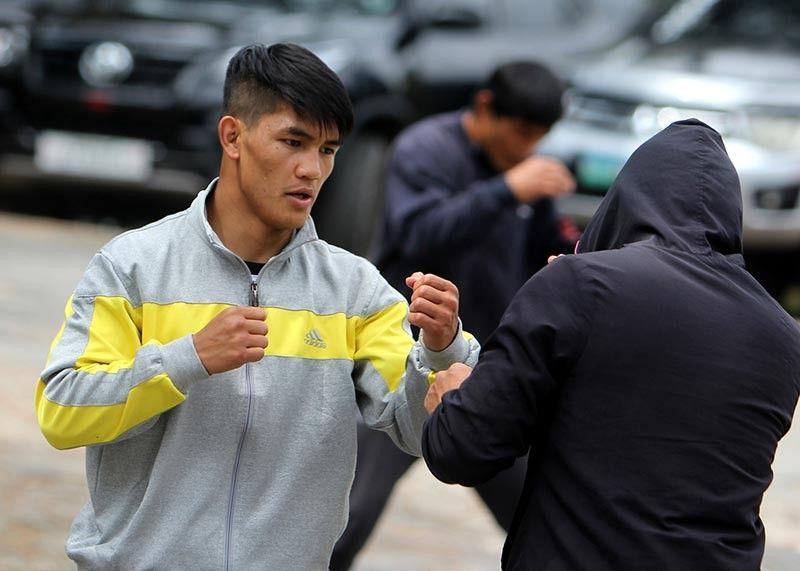 TITLE HUNT. Team Lakay’s Danny Kingad starts his build up for another tough assignment as he goes up against former ONE world champion Kairat Akhmetov of Kazakhstan in a ONE Flyweight World Grand Prix Semi-final bout. (Photo by Roderick Osis)

THREE Team Lakay fighters will be up for another tough challenge as ONE Championship returns to Manila in August with a stacked fight card.

Seeking redemption, Alvarez of the United States returns to action as he seeks to cement his status as an all-time great despite hitting a stumbling block in his ONE debut when he ran into Russian knockout artist Timofey Nastyukhin.

A former lightweight world champion, Folayang is also seeking redemption and hopes to reclaim the title again after falling against Shinya Aoki, the man he beat in 2016 for the title in their highly anticipated rematch in Japan last March.

Kingad is from Sadanga in Mountain Province, but went to school in Baguio and began training in wushu at the famed Team Lakay in 2012 winning gold medals in several local tournaments.

Inspired by the success of his esteemed teammates such as Folayang, he then turned his attention to the cage.

Kingad made a successful start to his professional career in 2014, debuting with ONE Championship on the way to an impressive 8-0 record.

This earned him a shot at the ONE flyweight world championship against Adriano Moraes, but the Igorot warrior unfortunately failed in his first world title bid.

Kingad is back on the title hunt, but will have to get past former champion Akhmetov, a three-time National Greco-Roman Wrestling Champion from Kazakhstan.

Akhmetov started his professional cage career in perfect fashion, taking the Eastern European scene by storm and winning his first 22 bouts. He then signed with ONE Championship in November 2015, with his first bout in the organization being against ONE Flyweight World Championship Adriano Moraes for the coveted belt.

After five grueling rounds, Akhmetov won the title via split decision in a thrilling affair and reached the pinnacle of his career. He then lost the title in an immediate rematch with Morales two years later, after a lengthy recovery period from a debilitating back injury.

In a ONE Lightweight World Grand Prix Semi-final bout, former ONE Featherweight World Champion Honorio Banario also of Team Lakay steps in for the injured Lowen Tynanes to take on Russia’s Timofey Nastyukhin. Both men are looking to advance to the final round of the high-profile tournament.

Banario is a top contender at lightweight who has won six of his last eight contests in the division. He possesses immense power in his hands, particularly his left hook, which has led to five big victories by knockout throughout his career.

A member of Baguio City’s famed Team Lakay, Banario faces one of his toughest opponents to date in Nastyukhin.

Nastyukhin, who shocked the world when he defeated Eddie Alvarez in the first round of the tournament via knockout, is a man on a mission. With only Banario standing in his way to the ONE Lightweight World Grand Prix Finals, the Russian stalwart will bring his heavy firepower to the ONE Circle, as he looks to end matters early and secure a finals berth.

ONE: Dawn of Heroes, set for August 2 at The Mall of Asia Arena in Manila will play host to another electrifying evening of world-class martial arts action.

In the main event, reigning ONE Flyweight Muay Thai world champion Jonathan Haggerty of the United Kingdom will defend his title against Rodtang Jitmuangnon of Thailand.