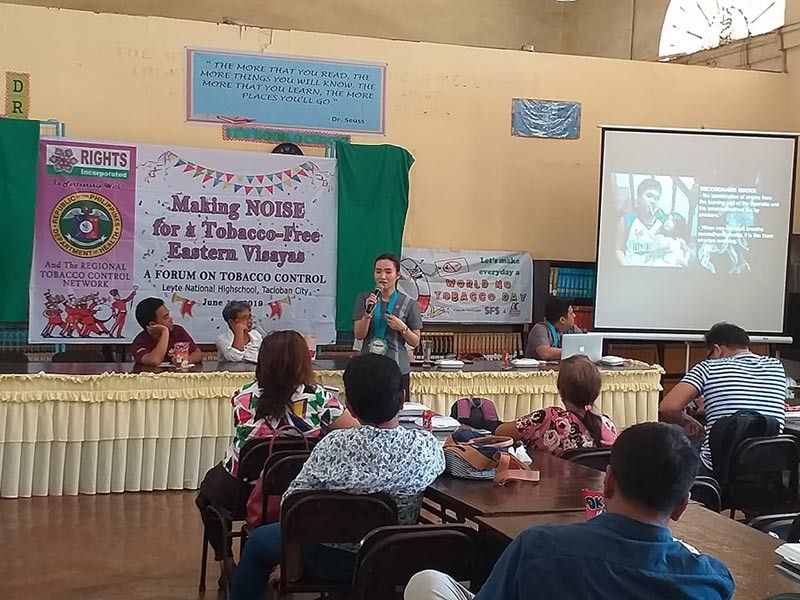 “The tobacco industry had been very creative in their dealings and interference. Thus, we would like to help in raising awareness within the community and the local government units (LGU) that there are existing laws on tobacco control and tobacco industry interference,” said Florina Reyes, Rights’ Leyte team leader for anti-tobacco campaign.

Reyes cited the joint memorandum circular 2010-01 of the DOH and the Civil Service Commission which called on the LGU officials to strongly implement the tobacco control laws.

“Information dissemination will lead to the conscious implementation of the said DOH-CSC JMC 2010-01 as it focuses on the conduct of dealing with the tobacco industry by government agencies, elected and appointed officials,” said Reyes as her group remained positive that LGUs will respond to the calls of the farmers, parents and the youth for a tobacco-free region.

Lolita Candaza, spokesperson of Katarungan Leyte, asked LGUs to pass local ordinances and to ensure an honest to goodness smoking cessation program to aid those who are willing to stop smoking.

“As farmers, and as parents, we are at a point when we cannot afford to get sick, much less inflicted with the health problems that come with smoking, what with kopra and palay prices at its level low and we are encountering many challenges in farm production,” said Candaza in a statement.

“The tobacco industry is ensuring that they have a captive customer base in the youth, with the introduction of vapes and other products that promise less tar, less nicotine and less addictive. We have yet to see the full-blown effects of these products to our youth,” added Vincent Basiano, Rights’ Tacloban coordinator for anti-tobacco campaign.

According to Basiano, the tobacco industry is now focusing its effort in attracting the youth sector by introducing products that appeal to the younger generation.

During the forum, Jonathan Ramirez, president of Supreme Student Government (SSG) of Leyte National High School, challenged the participating agencies to “ensure the legacy of health and a smoke free environment for the youth, the hope of the future.”

“Ensure that the laws will be strictly enforced. This, essentially, is what this advocacy is about,” added Ramirez who is also the spokesperson of Smoke-Free Squad, a youth-oriented group in Tacloban. (SunStar Philippines)