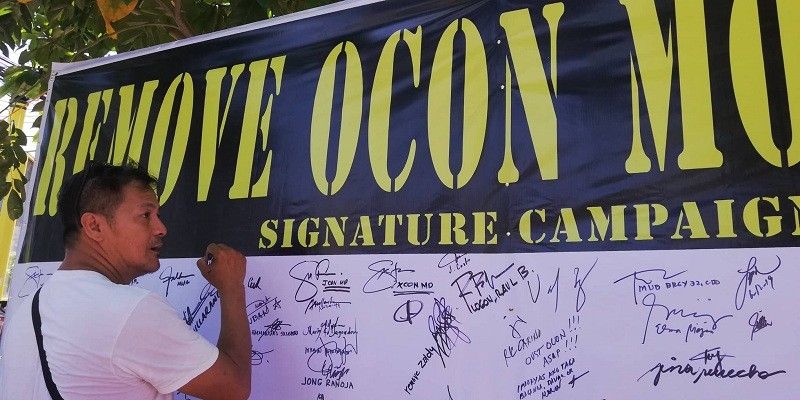 MISAMIS ORIENTAL. A concerned citizen on Wednesday, June 12, 2019 is about to sign his signature in a tarpaulin situated in Press Freedom Monument in Capitol grounds of Misamis Oriental, calling for the removal of Council Zaldy Ocon from his elective post, after having a verbal scuffle with former mayor Reuben Canoy at a hotel last week. Ocon asks for apology to Canoy through Monday's City Council session. (PJ ORIAS)

A GROUP of concerned citizens on Wednesday, June 12, 2019 have initiated a signature campaign against Cagayan de Oro City Councilor Zaldy Ocon in a bid to remove him from his elective office and be “banned” from the city.

Dubbed as “Remove Ocon Movement,” the group wants to get 50,000 signatures to “send a message that the city has had enough of Ocon's bad behavior.”

The number of signatures is said to be a minimum requirement for a recall petition under Republic Act No. 7160 or the Local Government Code of the Philippines.

A recall can be initiated by a petition of at least 25 percent of the registered voters in the local government unit (LGU) concerned.

An official could only be subjected to a recall only once during one's term of office, and from one year after the official took office, up to one year before the next regularly scheduled election.

Tess Padla, the group's spokesperson said 12 persons started the campaign and eventually decided to create the movement. She said the group is composed of ordinary residents in the city.

The signature campaign is held in the Press Freedom Monument and will run until June 30.

After the signature campaign, the group intends to make a case and file it to the Office of the Ombudsman or bring the matter to President Rodrigo Duterte.

“If he can do this towards somebody who is respected how much more kadtong mga ordinaryong pobre. So this is his time to go,” she added.

Padla urged Kagay-anons to visit the Press Freedom Monument to sign the petition.

It can be remembered that on May 7, Ocon had a heated argument with Canoy. Ocon already apologized but the former mayor's daughter said his apology came off rather self-serving.