Editorial: Cooperativism in the time of Kapa 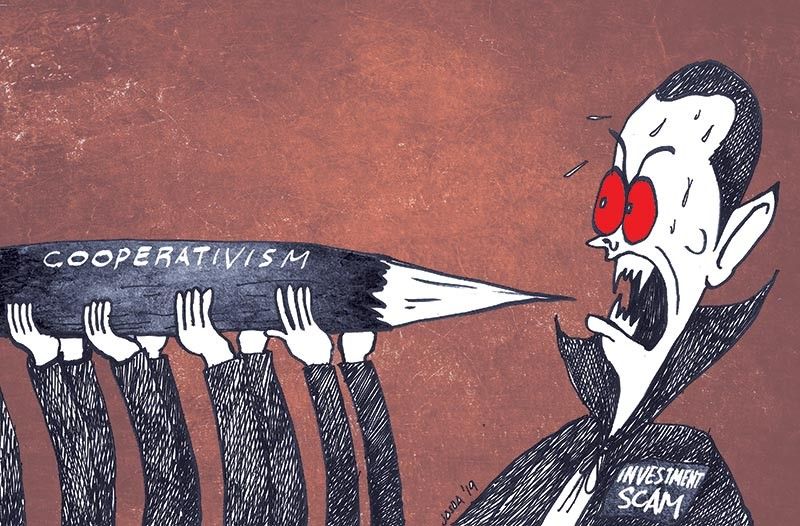 THAT the Kapa-Community Ministry International was able to engage around five million people from different corners of the country to invest, or “donate,” at least P10,000 to P2 million for divine and perpetual returns at a rate of 30 percent, it must have told a good story.

A May 8, 2019 Youtube upload of a speech by Kapa’s leader Pastor Joel Apolinario during a plant inauguration in southern Mindanao shows a comment thread with its members rabidly defending the good pastor; some of them swore God’s blessing reached their purse. The pastor speaks truth, they say.

But not so to the skeptical eyes of the Securities and Exchange Commission (SEC) with Chairman Emilio Aquino at the helm saying Kapa’s promise of a 30-percent monthly return until kingdom come is simply “mathematically impossible.” The Kapa assurance was that if one donated P10,000, one would get P36,000 in a year, and therefore a return of 260 percent. Kapa would need P15 billion monthly to pay five million members who donated at least P10,000.

The SEC sees the Kapa deal as another Ponzi scheme, generating high revenues for early investors while sucking the blood out of those down the line; another ugly cousin of the pyramiding scheme.

But then again, something needs to be said about five million people going out of their way to toss in their money into the table with high hopes of a good return. As the Kapa tag goes, “Ang pobre padatuon.” (To make the poor wealthy).

More than the promise of a sweet, hefty return is the fact that people have available income to set aside for investment. That is a good sign, which brings to mind a Cooperative Development Authority statistic that shows that from 2011 to 2018, cooperative membership doubled from seven million to 14 million all over the country. As of last count last year, there were about 27,000 cooperatives.

As an aside, the Catholic Church in the 1960s Philippines pushed for the creation of cooperatives in the parishes as a matter of teaching. This was part of the call of the Second Vatican Council for the church to address poverty and social injustice. It was spirituality in pragmatic terms. Kapa’s, on the other hand, is a different story altogether.

The current administration may revisit the Philippine Cooperative Code, which was created in 2008. Investment scams recur like the seasons year in and year out, and each time they do, we see a multitude of people showing a good deal of zeal to invest their money in just about anywhere that’s potentially profitable.

Giving the cooperative movement its popular place again is an excellent counter-narrative against investment scams.