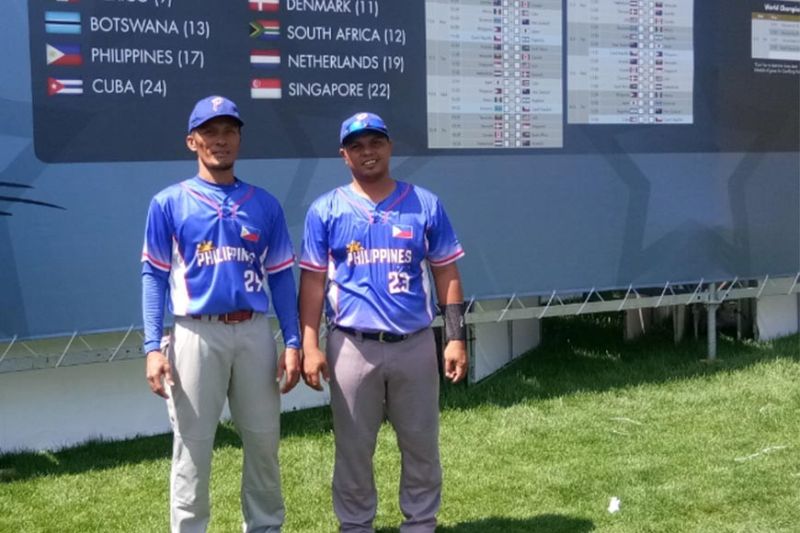 FROM DAVAO TO THE WORLD. Former University of Mindanao batters Saxon Omandac and Earl Ryan del Socorro form part of the World ranked No. 17 Philippine Blu Boys who will first clash against No. 24 Cuba in Group A of the WBSC Men’s Softball World Championship today, June 14, at the Hippos Arena, Havlíckuv Brod, Czech Republic. (Earl Ryan Del Socorro)

NEVERMIND if the Philippines is playing in the Group of Death with World No. 1 New Zealand and World No. 3 Japan as former University of Mindanao (UM) baseball pitcher Earl Ryan del Socorro is upbeat to make his WBSC Men’s Softball World Championship debut when the Blu Boys clashes against Cuba Friday, June 14, at the Hippos Arena, Havlíckuv Brod, Czech Republic.

The 29-year-old father of two, who collected three most valuable player (MVP), three best pitcher, two best slugger and one stolen 3 awards and three championships for the Davao Region Prisaa in past stagings of the National Prisaa Games, said, “Syempre kabado din excited kay nag represent sa country tapos proud (I’m nervous but excited to represent the country and I am proud).”

Also playing for the country are his elder brother Edmer, the national men’s softball team captain and starting pitcher, and Saxon Omandac, who are also alumni of UM. Edmer is seeing action in his third World stint while Omandac is on his second appearance. The Del Socorro brothers and Omandac were under the tutelage of UM’s veteran baseball coach Joaquin “Boy” Sarabia.

Del Socorro said he only shifted to softball this year after focusing on baseball since 2013 when he went to Manila. He then joined the Philippine Air Force (PAF) and is an Airman Second Class since 2014.

He claimed to be a utility player in the team, adding, "Kahit saan pero ang pinaka focus ko ang second base."

The Philippines, whose stint is supported by the Philippine Sports Commission and Cebuana Lhuillier, is World ranked 17th while Cuba is 24th. Also entered in Group A aside from New Zealand, Japan, Philippines and Cuba are No. 5 Argentina, No. 7 Czech Repoublic, No. 9 Mexico and No. 13 Botswana.

Del Socorro, meanwhile, hopes to also play in his first SEA Games set in the Philippines, an opportunity he missed the past years when he was undergoing basic military training with PAF.