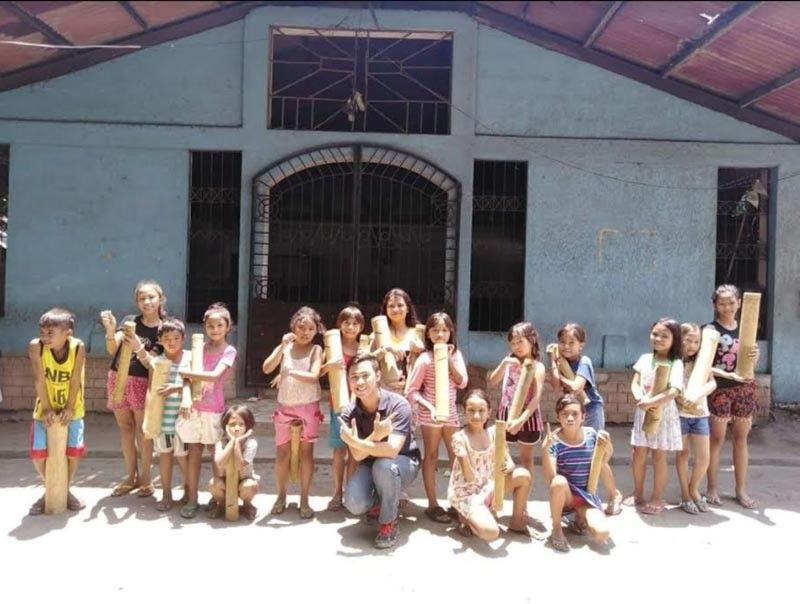 BACOLOD. Negrense “global changemaker” Elmeer Meeynard Calimpos, also the founder of Bacolod Core: Children Optimization for the Revitalization of Environment, with the children-recipients at Barangay Tangub in Bacolod City holding their Core Bamboo Coin Banks, one of the project highlights of his organization. (Contributed photo)

A NEGRENSE youth climate advocate was the only Filipino to be given a prestigious title as “global changemaker” this year by international organization Global Changemakers mainly for the “solution” he initiated addressing climate change and plastic pollution.

Elmeer Meeynard Calimpos, 21, of Barangay 16 in Bacolod City, was among the 60 young people chosen out of 1,294 applicants from different countries in the world.

He will represent the Philippines in the week-long Global Youth Summit in Switzerland on July 13 to 19 this year.

Calimpos said joining the event is a freedom for a young Filipino like him to represent the Philippines - to tell its conservation stories, struggles, and legacies.

“I want to attend this summit because I firmly care for my country which is one of the largest polluters of the ocean in the whole world,” he said, adding that “I want to explore with the dynamic culture of other nations and how they achieved sustainability through transformative research and innovation.”

As a child advocate for climate, Calimpos said he wants his fellow “changemakers” to get closer to the children of their community since it is evident that mortality rate across the globe is increasing due to the changing climate.

“I want Global Youth Summit 2019 because of the knowledge-skills-attitude-values from the speakers which shall also be my guide in shaping my community for the better,” he said, adding that “I believe I can make a big difference through global partnerships and collaborations.”

All aged between 18 and 23, this year’s “global changemakers” were selected through a rigorous process to represent 42 nations including Togo, Bhutan, South Sudan, Belarus, Pakistan, Lesotho, Tunisia and Philippines, among others.

The cohort will join the network of “global changemakers” comprised of at least 1,000 young leaders from across the world whose works have impacted over four million people.

For Calimpos, he founded the Bacolod Core: Children Optimization for the Revitalization of Environment, a local youth-led organization with a heart for building a community of environmentally conscious children for the children to their children, the nation, and to God.

Through the organization formed in February 2018, he is advocating for a multi-step learning process to the children on their formative stage by inculcating values of environmental stewardship through education, experiential learning and exposure for a sustainable and balanced ecology.

In November 2017, as Calimpos recalled, he visited one of the communities in the Negros Occidental capital city.

He was disturbed upon witnessing the children diving in a degraded sea side full of trashes primarily composed of single-used like diapers, napkins, sando bags, sachets, and worse, feces of both animals and humans.