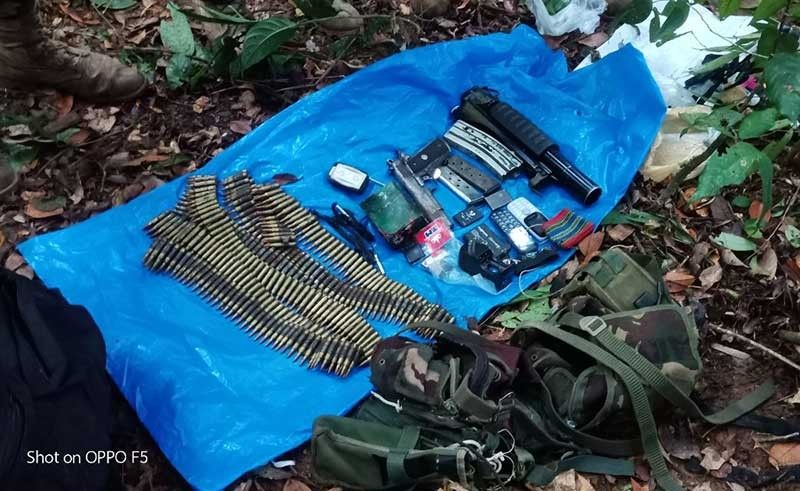 MINDORO. The military said they recovered firearms and ammunition from a New People's Army encampment after a shootout with the rebels on June 13, 2019 in Oriental Mindoro. (AFP Photo)

THREE suspected members of the New People’s Army (NPA) were killed in an encounter with police and military forces in Oriental Mindoro on Thursday afternoon, June 13, 2019.

He said they received information from a concerned citizen that communist rebels were conducting training for newly recruited members, including minors, in the area.

“This prompted us to conduct Focused Military Operation (FMO) and our troops were able to locate their whereabouts, and firefight broke (out),” said Teofilo.

He said the encounter with at least 40 suspected NPA rebels lasted for two and a half hours. When the gunfire stopped, Teofilo said their men overran the NPA encampment and found the bodies of three suspected rebels.

Teofilo said it was possible that there were more casualties among the suspected rebels, including a high ranking NPA commander, due to the bloodstains found along their withdrawal route and based on the reports from civilians.

“This is a major blow on the NPA in Mindoro. Their days are numbered and in just a matter of time the NPA here will be on the verge of collapse due to their numerous setbacks in armed encounters and snowballing of surrenderers,” Teofilo said.

"Surrender or suffer the fate of your killed comrades,” he added.

Meanwhile, Lieutenant Colonel Alexander Arbolado, commander of the four battalions that took part in the said operation, said one of his soldiers was wounded in the left ear. The soldier is safe.

Additional troops and bomb sniffing dogs were deployed to go after the fleeing communist rebels.

The said encounter was second armed clash that occurred in Mansalay town this year.

On February 21, two suspected NPA fighters were killed in an encounter with the military in Barangay Terirsita. (Third Anne Peralta-Malonzo/SunStar Philippines)